Search and rescue at collapsed Surfside condo suspended ahead of demolition, tropical storm 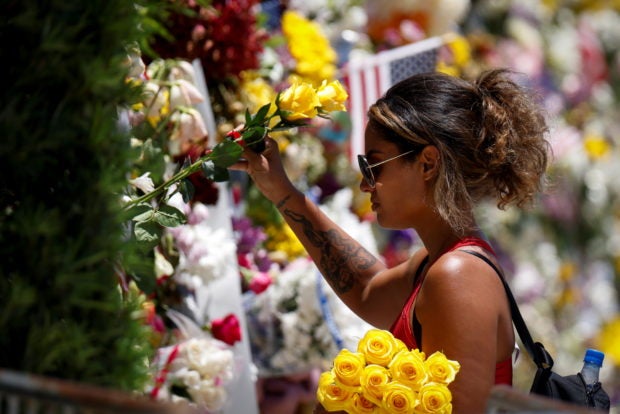 A woman mourns at a memorial site created by neighbors in front of a partially collapsed residential building as the emergency crews continue the search and rescue operations for survivors, in Surfside, Florida, U.S. July 3, 2021. REUTERS

SURFSIDE, Florida — The search for survivors and remains of the dead were suspended Saturday at the partially collapsed Miami-area condo as officials prepare to demolish the remaining structure ahead of Tropical Storm Elsa.

The demolition of the 12-story Champlain Towers South condo complex in Surfside could happen as soon as Sunday, officials said.

“We don’t have a specific time for the demolition,” said Miami-Dade County Mayor Daniella Levine Cava. But she said necessary preparations for the demolition, including “drilling into columns” make the site unsafe to continue search and rescue.

“We are moving as quickly as possible,” Cava said. “We are still hopeful we can do the demolition before the storm.”

“As of this time we will not need to evacuate any (nearby) buildings,” Cava said.

Fire officials said the building would be removed in a controlled manner using explosive charges, not a wrecking ball or other methods. Contractors were inspecting the site on Saturday to come up with a plan, officials said.

Earlier Saturday, two more people were found dead in the rubble of the collapsed condo, officials said at a news conference, bringing the total to 24 deceased. The number of missing or feared dead dropped to 121 late Saturday, as the operations continued into a 10th day.

Miami-Dade Fire Chief Alan Cominsky told reporters earlier that the demolition of what was left standing of the towers had to take place as soon as possible because Elsa is forecast to reach southern Florida as early as Monday. “We’d have no control of where it lands,” he said.

Florida Governor Ron DeSantis has declared a state of emergency for a number of South Florida counties including Miami-Dade, with the declaration making additional manpower and other resources available to the communities.

When asked about the potential demolition, President Joe Biden said he had not yet been briefed on it.

Surfside Mayor Charles Burkett said the timeline was pushed forward on the demolition. “Obviously the building is a problem and the only solution is to get rid of it,” he said.

Worries that the remaining section of the complex was dangerously unstable also halted search and rescue efforts at the scene for much of Thursday.

No survivors have been pulled alive from the ruins since the first few hours after the tower partially caved in on itself early on June 24.

Investigators have not determined what caused the 40-year-old complex to collapse. A 2018 engineering report found structural deficiencies that are now the focus of inquiries that include a grand jury examination.

Meanwhile, all residents of another building, Crestview Towers in North Miami Beach, were told on Friday to leave immediately after engineers found serious concrete and electrical problems, officials said.

The move was considered urgent due to the approach of Elsa, North Miami Beach city manager Arthur Sorey said, adding that the building’s owners had not yet begun a mandatory safety recertification process required 40 years after it was built.

“It’s definitely not an easy decision,” Sorey said. “It’s just the right thing to do during these times. It’s uncertain what’s going to happen with the storm.”