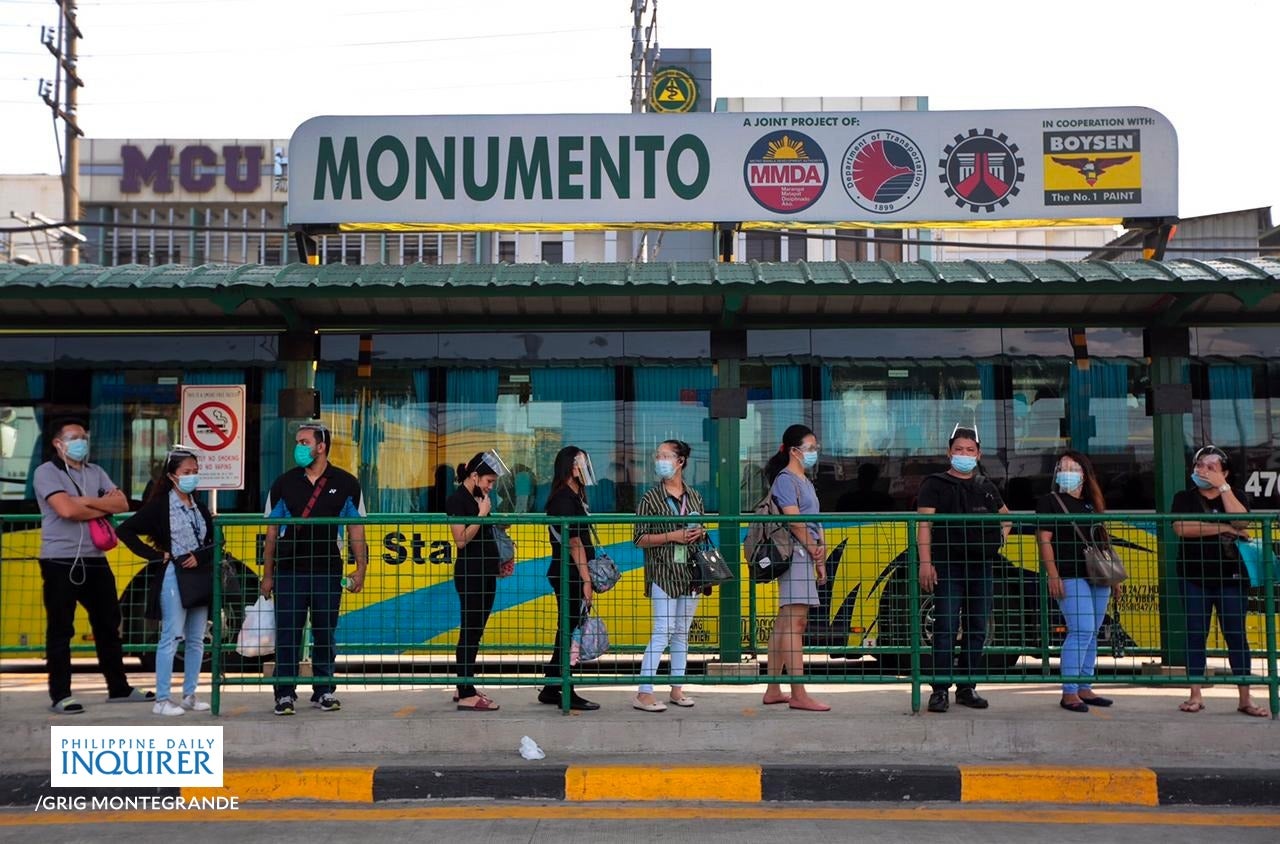 Commuters queue to ride the EDSA Bus Carousel in Monumento, Caloocan City on Wednesday, June 30. Passengers are calling on the government to extend the Libreng Sakay program as the Bayanihan As One Act end its effectiveness on June 30, prompting the DOTr and LTFRB to suspend its Service Contracting and Free Ride starting July 1. – INQUIRER/GRIG C. MONTEGRANDE

The Department of Transportation (DOTr) need not suspend its public transport service contracting and Libreng Sakay programs with the expiration of the Bayanihan to Recover as One Act (Bayanihan 2) since it still has some P3 billion in available funds.

House transportation panel chair and Samar Rep. Edgar Mary Sarmiento appealed to the agency to extend the programs until public transport has returned to full normalcy.

“Even with the expiration of the Bayanihan 2 law, the DOTr can continue implementing Libreng Sakay without the need for new legislation. The program has a separate allocation from the national budget of more than P3 billion. This is more than enough to fund the extension of the program until Dec. 30, 2021,” Sarmiento said in a statement.

He said this should give Congress more time to act on pending legislations that would provide money for the extension or even expansion of the scheme.

The DOTr announced the suspension starting July 1 of the Libreng Sakay and service contracting programs following the expiration of the Bayanihan 2 law on June 30. Funds not used with the lapse of the law automatically revert to the Bureau of the Treasury and could not be reallocated without new legislation.

However, Sarmiento explained that both programs could continue because of the P3 billion in unused funding for the DOTr under the 2021 national budget.

He said P8.58 billion was allocated to finance the service contracting program as a form of assistance to the public transport sector. Of this amount, P5.58 billion would come from the Bayanihan 2 fund and P3 billion from the 2021 national budget.

Sarmiento said the DOTr obligated around P1.82 billion and disbursed P1.42 billion from the Bayanihan 2 funds. This represented only 25.44 percent of the total budget for the service contracting program.

With the expiration of the Bayanihan 2 funds, the remaining P3.75 billion out of the P5.58 billion for the service contracting program reverted to the national treasury.

Sarmiento said the service contracting program was a “true lifesaver” for many public utility drivers and operators who lost their source of livelihood because of the COVID-19 pandemic.

The service contracting program allowed drivers to earn based on the number of kilometers traveled, instead of the number of passengers. The free ride program, on the other hand, has reached a ridership of 27.9 million.

One impact of the lapse of Bayanihan 2 was that the commuting public now faced higher costs in getting to and from their workplaces as fewer jeeps and buses would be on the streets, according to Sen. Risa Hontiveros.

“This is in light of various problems faced by transport workers such as reduced passenger capacity, shorter routes and other pandemic-related restrictions, which have made it almost impossible to sustain their livelihood,” Hontiveros said.

“The disruption of the Libreng Sakay program is not the only effect of the loss of billions of pesos of funds for service contracting [with the lapse of Bayanihan 2],” she said in Filipino.

“If the DOTr and the LTFRB do not act immediately, the expenses of commuters will suddenly rise because of the scarcity of jeeps and buses plying the streets,” Hontiveros warned.

She also urged the DOTr and LTFRB to collaborate with local government units to finance similar agreements to match or even go beyond the P5.58 billion previously allocated for the program under Bayanihan 2.

At the same time, Hontiveros said the DOTr and the LTFRB should fix major issues that have negatively affected the efficiency of the service contracting program, including lengthy and complicated requirements, poor guidelines in relation to routes, and slow disbursement of pay to drivers and operators.

“We hope these agencies act with dispatch to prevent inconveniencing our people,” she said. INQ

Read Next
OVP spends P113M for pandemic response sans COVID funds from gov’t
EDITORS' PICK
Heads may roll at BOC, says Palace if sugar smugglers are allowed to use recycled import permits
Palace: Biggest supermarkets in PH commit to sell sugar at P70 per kilo
vivo brings to the Philippines a powerful smartphone with a slimmer body, the vivo Y02s for only PHP 6,499
What to watch out for when selecting a video surveillance solution
House energy committee chair Arroyo bats for cheap electricity
DOH reports increase in daily COVID-19 deaths, mostly unvaxxed
MOST READ
DepEd to give teachers P5K cash allowance within first week of classes
GSIS cool to idea of lowering retirement age in PH
Alyssa Valdez to miss Creamline’s AVC Cup campaign
DOJ indicts bank officer in $2.1 billion Wirecard fiasco
Don't miss out on the latest news and information.