Canada Day muted as country reckons with treatment of indigenous, other minorities 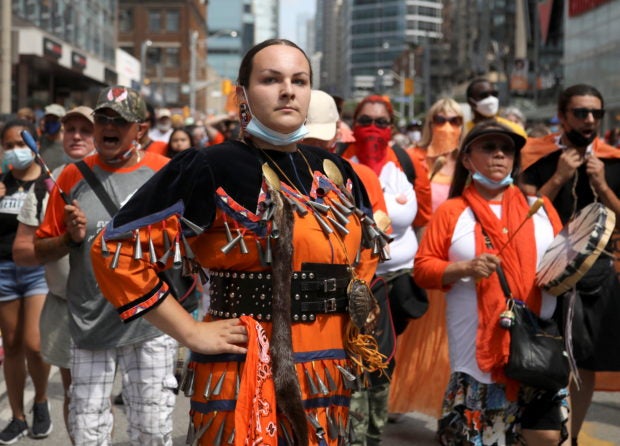 Indigenous performer Danielle Migwans attends a march after the discovery of hundreds of remains of children at former indigenous residential schools, on Canada Day in Toronto, Ontario, Canada July 1, 2021. (REUTERS)

OTTAWA  – Multiple cities scrapped Canada Day celebrations on Thursday after the discovery of hundreds of remains of children in unmarked graves at former indigenous schools sparked a reckoning with the country’s colonial past.

Calls to scale back or cancel celebrations snowballed after, beginning in May, almost 1,000 unmarked graves were found at former residential schools in British Columbia and Saskatchewan that were mainly run by the Catholic Church and funded by the government.

Traditionally the holiday is celebrated with backyard barbecues and fireworks much like July 4 in the United States. This year, however, Canadian Prime Minister Justin Trudeau said the day would be “a time for reflection.”

A #CancelCanadaDay march in Canada’s capital, Ottawa, turned into a sea of orange as thousands rallied wearing orange shirts to honor the victims and survivors of Canada’s residential school system. They carried a large banner that read, “No pride in genocide.”

The residential schools forcibly separated indigenous children from their families, in what the Truth and Reconciliation Commission in 2015 called “cultural genocide.”

Orange has come to symbolize the acknowledgment of the victims of the country’s residential school system.

Vigils and rallies were held across other parts of the country.

“Canada is having a reckoning with its history,” said Akwasi Owusu-Bempah, a University of Toronto sociology professor who studies race, crime and criminal justice. 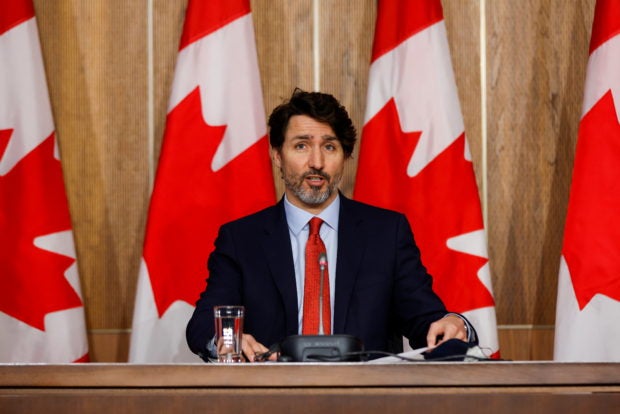 Canada’s reputation for tolerance was built on its efforts, starting in the 1970s, to create a multicultural society. But data shows inequalities abound both for indigenous communities and among visible minorities.

In his Canada Day message, Trudeau said the discoveries of the remains of hundreds of children at former residential schools “have rightfully pressed us to reflect on our country’s historical failures,” and the injustices that still exist for indigenous peoples and many others in Canada.

“This Canada Day, let’s recommit to learning from and listening to each other so we can break down the barriers that divide us, rectify the injustices of our past, and build a more fair and equitable society for everyone.”

Indigenous people, who make up less than 5% of the population, face higher levels of poverty and violence and shorter life expectancies.

Some 30% of visible minorities and indigenous peoples feel treated like outsiders in their own country, according to an Angus Reid Institute poll on diversity and racism published on June 21.

The discovery of the remains and a deadly attack on a Muslim family in June that killed three generations of members has led to soul-searching in Canada about the country’s oft-touted reputation for tolerance. The suspect is accused of murder and domestic terrorism.

Hate crimes against Muslims rose 9% to 181 in 2019, according to the latest data by StatCan. About 36% of indigenous people and 42% of visible minorities said Canada is a racist country, according to the Angus Reid survey.

A number of Muslim women who wear hijabs have also been attacked in Alberta in recent weeks, while in Quebec a law banning public servants from wearing the hijab is facing legal challenges, and critics have called the measure a form of institutionalized racism.

New Democrat lawmaker Mumilaaq Qaqqaq, who is Inuk, said she felt unsafe in the House of Commons as an indigenous woman, and last month announced she would not run for re-election.

“I don’t think there’s any reason for celebration (on Canada Day),” Qaqqaq said.

Read Next
DND throws punch at Pacquiao over corruption claim in frigate deal
EDITORS' PICK
Duterte: When I said I will fight drugs in 6 months, I thought it was like in Davao
Duterte warns of possible lockdown if ‘more aggressive’ Delta variant spreads
Tips for a cheerful life
Hidilyn Diaz wins weightlifting gold in Tokyo Olympics
Harnessing technology for quality education
Connect to PH’s fastest network with new Signature Plan Lite at only P599 per month
MOST READ
Hidilyn Diaz wins weightlifting gold in Tokyo Olympics
Hidilyn shoots not only for gold but also for permanent place in PH sports history
Go to war with China over West PH Sea? It will be a ‘massacre’, says Duterte
Duterte acclaims Sotto: ‘He can become a good vice president’
Don't miss out on the latest news and information.