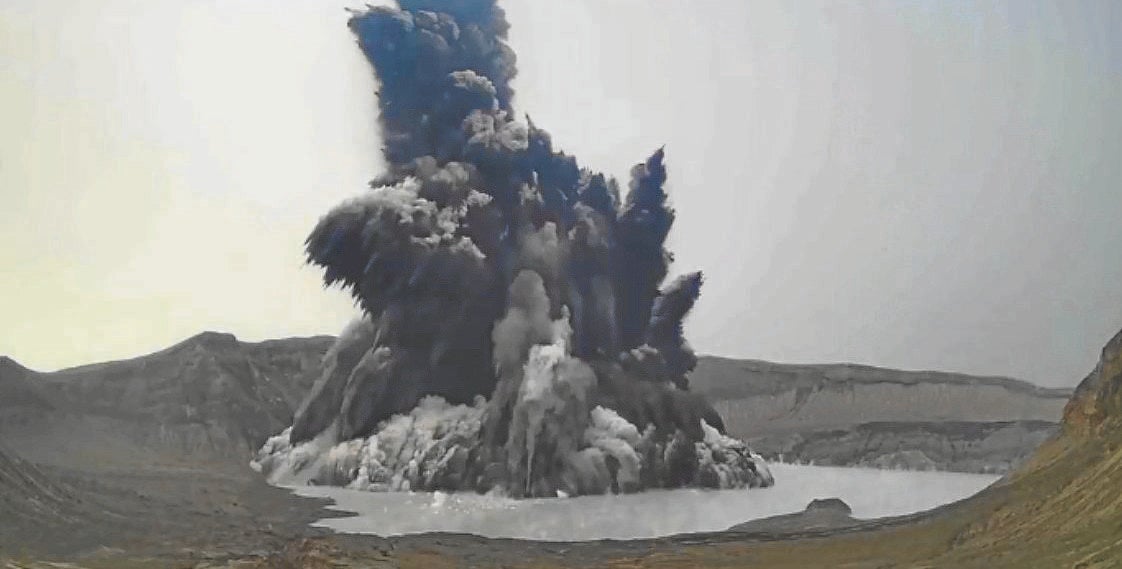 OMINOUS SIGHT A dark plume of steam, rocks, and magma fragments rises about a kilometer high from the main crater of Taal Volcano on Thursday afternoon, sending residents of nearby towns into a panic. Phivolcs raised the alert status of Taal to Level 3, indicating magmatic unrest, and recommended the evacuation of residents in two Batangas towns. —VIDEOGRAB FROM PHIVOLCS

A total of 1,392 persons have so far been affected by the volcanic eruption, including 1,282 individuals now in 11 evacuation centers.

“The volcano island is of course off-limits and the high-risk barangays are being evacuated by the LGUs based on the recommendation of PHIVOLCS,” NDRRMC spokesperson Mark Timbal told reporters.

The NDRRMC said there were 13 barangays affected by the volcanic activity. These were: Poblacion, Sinturisan in San Nicolas; Gulod, Buso Buso, Bugaan West, Bugaan East in Laurel; Subic Ilaya, Banyaga, Bilibinwang in Agoncillo; Apacay in Taal; Luyos, Boot in Tanauan City; and San Sebastian in Balete.

Alert Level 3 was raised over the Taal Volcano on Thursday due to “magmatic unrest” at its main crater.

“Given the lessons and experience last year with Taal Volcano, we are better prepared to assist the LGUs who are as well learned and prepared with their Incident Management Teams,” he said.

“We have placed more personnel on alert and ready for immediate deployment. Communications equipment were also deployed,” he added.