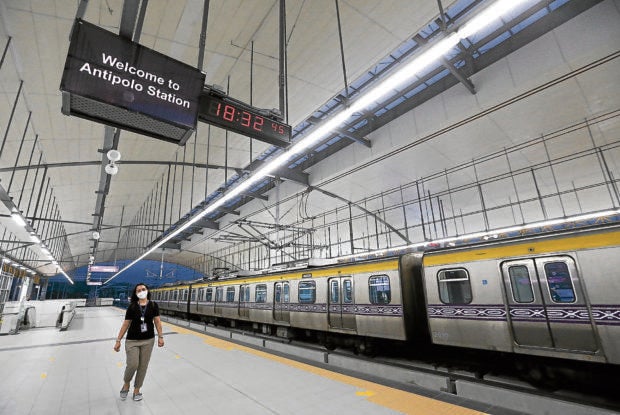 The P4.5-billion extended LRT 2 line that will connect Recto in Manila to Antipolo, Rizal province, will start serving the public on Monday and President Duterte announced that the public can avail of free train rides for two weeks, according to the Department of Transportation (DOTr).The LRT 2 East Extension project will have two new stations: Marikina-Pasig and Antipolo stations.

According to the DOTr, these two stations will add 3.793 kilometers to the existing 13.8-km LRT 2 train line.

During the stations’ inauguration on Thursday Transportation Secretary Arthur Tugade assured Mr. Duterte that the public will enjoy free rides for two weeks.

Once operational, the new stations are expected to increase the rail line’s average daily passenger capacity from 240,000 to 320,000.

The extension line is also expected to reduce travel time from Claro M. Recto in Manila to Masinag in Antipolo from three hours via bus or jeepney to 30 to 40 minutes.

With the new stations, the DOTr hopes to urge road passengers in heavily congested areas along Marikina, Pasig and Antipolo, such as Marcos Highway, to ride the train instead and ease traffic buildup.

Before the new rail line was built, only five trains had been running from Recto to Santolan stations.

6 years in the making

With the newly inaugurated stations, the DOTr said eight trains would be deployed from Recto to Antipolo stations.

It took the government a total of six years to finish the construction of the extension project.

Since 1999, it has been a part of the master plan for the metropolis under the Metro Manila Urban Integration Study, according to the DOTr.

The DOTr said the construction of viaducts began in April 2015, or three years after the project was approved by the National Economic and Development Authority board in September 2012.

But the actual construction commenced on Feb. 20, 2017, with a P1.1-billion contract under the government’s “Build, Build, Build” program, and a P3.4-billion electromechanical systems contract awarded in December 2018.

—WITH REPORTS FROM LEILA B. SALAVERRIA AND MIGUEL R. CAMUS INQ