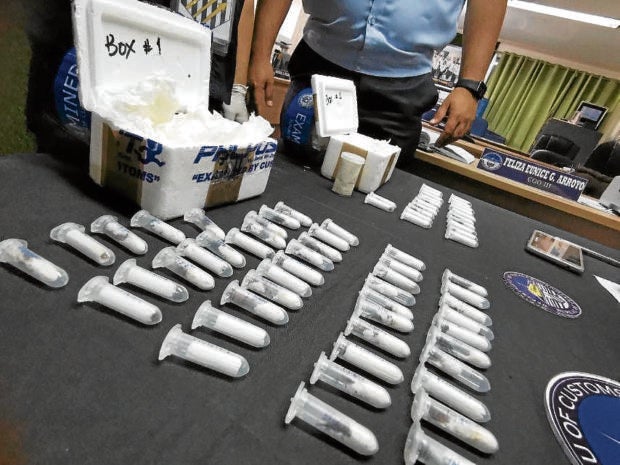 They were marked as “teaching materials,” and sure enough, the smuggled spiders and centipedes taught their consignee a lesson he won’t soon forget:  trading in endangered wildlife species is a crime that can land one in jail.

The Bureau of Customs (BOC) on Wednesday seized rare spiders and centipedes misdeclared as classroom aides at the Philpost Central Mail Exchange Center.

The BOC office at Ninoy Aquino International Airport (Naia) said it discovered the live crawlers inside a parcel that has been unclaimed and overstaying at the exchange center.

According to the bureau, the parcel contained 44 wildlife species—25 tarantulas, 12 spiderlings, 5 centipedes, and 2 ornithoctonus black spiders—which were placed inside individual plastic containers and vials.  The parcel, which the BOC said had an estimated value of at least half a million pesos, was turned over to the Department of Environment and Natural resources.

“The parcel from Thailand was consigned to a certain Aldwin Capucae in Pasay City, Metro Manila, and was declared to contain ‘Plastic Teaching Materials for University,’” the BOC said in a statement.

The bureau said a warrant of seizure and detention was issued against the parcel, while an investigation was ongoing for the possible filing of charges against the supposed claimant for violation of Republic Act No. 9147, or the Wildlife Resources Conservation and Protection Act, and Republic Act No. 10863, also known as the Customs Modernization and Tariff Act.

Tarantulas are classified as endangered wildlife species. Under Section 1401 of the Customs Modernization and Tariff Act, the unlawful importation of endangered wildlife is punishable with a jail term ranging from 31 days to six months, or a fine of P25,000 to P75,000,  or both, if the appraised value of the unlawfully imported goods, including duties and taxes, does not exceed P250,000.

The BOC earlier warned that trading in illegal wildlife is punishable with prison time that ranges from six months and one day to one year, and a fine of P10,000 to P200,000, based on the Wildlife Resources Conservation and Protection Act. INQ