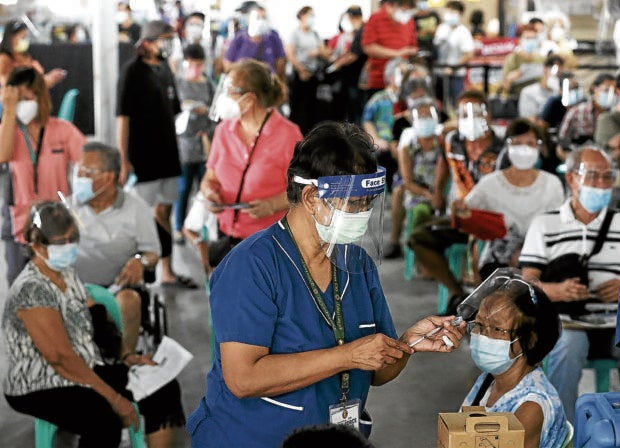 EARLY RECIPIENTS Senior citizens in Parañaque City are inoculated with the CoronaVac vaccine at a shopping mall near Manila Bay on Friday. —RICHARD A. REYES

MANILA, Philippines—In the fight against COVID-19, the government selected “priority” areas for vaccine inoculation, giving most doses to “high-risk” places, including the so-called National Capital Region (NCR) Plus 8.

Malacañang dismissed claims of “inequality” in the distribution of vaccines, saying allocation was based on health experts’ findings.

In June, presidential spokesperson Harry Roque said that areas at most risk of a surge in COVID-19 cases were priority in vaccine deployment.

“That is not inequality because it is based on science,” said Roque.

“The areas with high COVID-19 cases are given more supply because inoculation is a defense to mitigate the spread of COVID-19,” he said in Filipino.

The NCR Plus 8, the government’s initial priority for coronavirus vaccination, consists of Metro Manila, Cavite, Pampanga, Batangas, Rizal, Bulacan, and the metropolitan cities of Cebu and Davao.

But as COVID-19 cases started to rise in several areas outside the NCR Plus, the government included the cities of Bacolod, Iloilo, Cagayan De Oro, Baguio, Zamboanga, Dumaguete, Tuguegarao, General Santos, Naga and Legazpi on the list last June 23.

Roque earlier said that Fr. Nick Austriaco, an expert advising the government on COVID-19 response, noted the importance of having “population protection” in the NCR Plus “because the ink that’s spreading comes from here and when we stop the source of the ink, we will decrease the number of cases in the entire country,” 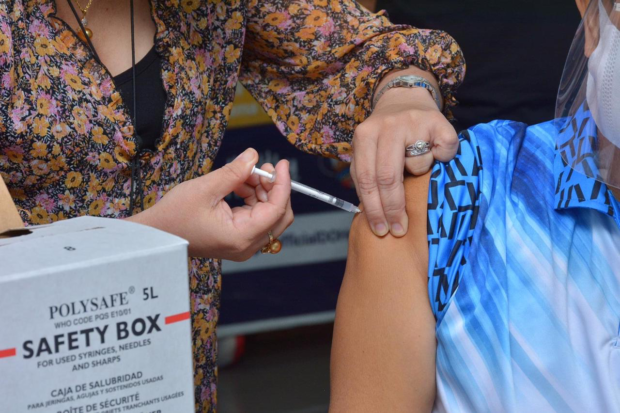 A WORKER IN CALAMBA, LAGUNA GETS HER FIRST INJECTION OF CORONAVIRUS VACCINE LAST MAY 1. PHOTO FROM CENTER FOR HEALTH DEVELOPMENT CALABARZON

But almost four months since the first rollout of vaccines in the Philippines, how many individuals had been inoculated in the NCR Plus?

According to the latest data from local government units that were collated by INQUIRER.net, 4,334,595 doses were administered for the first dose and 1,410,772 for the second dose in Metro Manila and the rest of the NCR Plus 8, except for the metropolitan cities of Cebu and Davao. 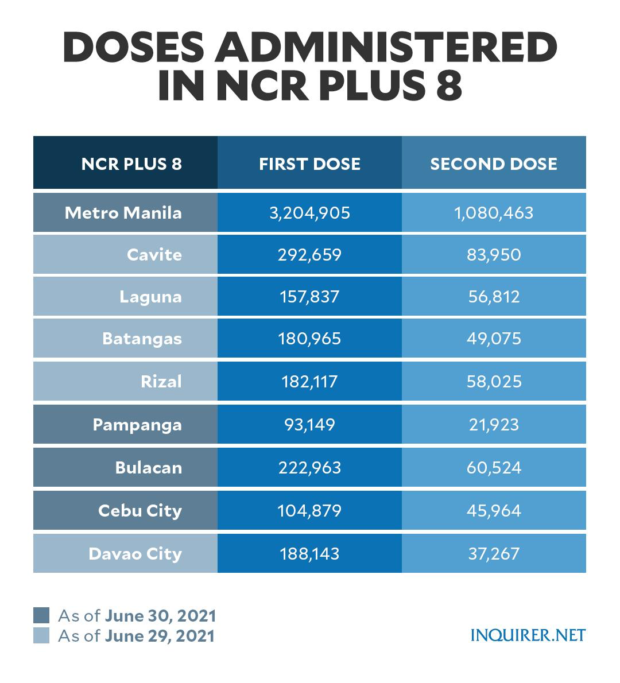 Metropolitan Manila Development Authority Chair Benjamin Abalos, Jr., at a press briefing, said in Metro Manila, “by the end of September”, 14.5 million doses will be administered.

“Why don’t they give the vaccines because that is for prevention? Why is it that you favor who calls, who is a friend or who is angry?” Garin said in Filipino.

Garin, former health secretary, said there should be a systematic and scientific way of distributing the vaccines.

“There’s no problem in accommodating them. But not at the expense of other areas that are wanting vaccines and other beneficiaries who need their second doses of the vaccines,” she said.

At a press briefing on Thursday, Roque said that the government was giving vaccines “to all on the basis of population, but, of course, with more to areas with local surges.” 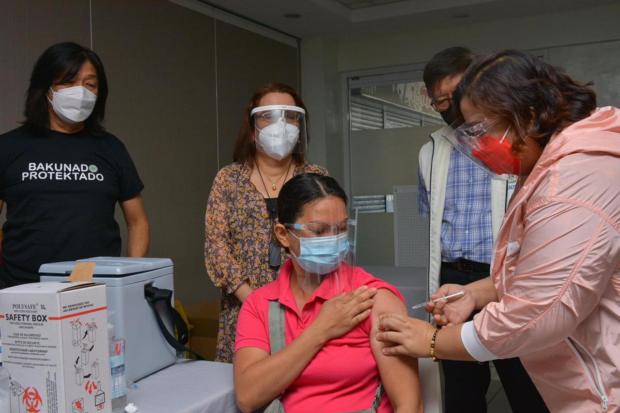 A WORKER GETS HER FIRST VACCINE INJECTION IN CALAMBA, LAGUNA LAST MAY 1. PHOTO FROM CENTER FOR HEALTH DEVELOPMENT CALABARZON

Based on data publicly reported by local health offices, Calabarzon has a total allocation of 1,574,959 doses as of June 29. Davao City, meanwhile, has received 248,435 for the first dose and 182,735 for the second dose.

Bantay Bakuna said if the government will continue to select “priority areas”, it should be “based on the direness of COVID statistics in an area.”

‘Not the only solution’

Dr. Jamie Dasmariñas, the physician representative of Bantay Bakuna, said that “vaccines are not the only solution in fighting this pandemic [because it should include] a strong public health system anchored in the framework of a holistic socio-economic and good governance response.”

Based on the latest data, areas in the NCR Plus continued to report active COVID-19 cases. Data on June 30 showed these areas with their COVID-19 cases:

In an earlier statement, Bantay Bakuna called for the “capacitation of the health systems within the regions.”

“If local government units are having difficulties, the central government should step in to give them support, such as an increase of funding for local health measures, and hiring adequate numbers of health human resources for those in the regions, especially for grassroots areas, with proper salaries and benefits,” the group said.