Phivolcs not expecting Taal Volcano to erupt like in January 2020 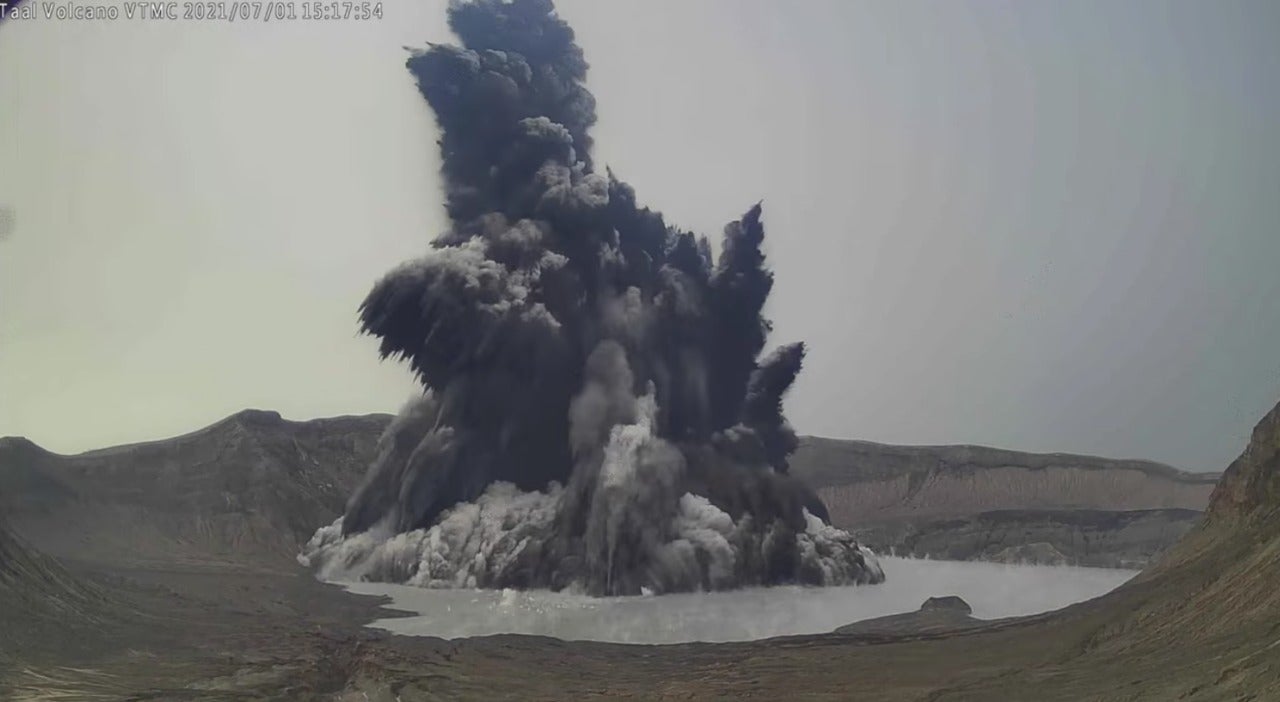 MANILA, Philippines — The Philippine Institute of Volcanology and Seismology (Phivolcs) has calmed people’s worries of Taal Volcano exploding the way it did in January last year.

Phivolcs Director Rene Solidum cited a difference in the way the restive volcano erupted more than a year ago and on Thursday, explaining that Taal is now acting up in an “open system,” thus, containing less pressure compared to its January 2020 flare-up.

Earlier Thursday, Phivolcs placed Taal on Alert Level 3 after the volcano released a “dark phreatomagmatic plume” of around one kilometer high.

(The January 2020 incident was a small explosion that increased in size dramatically due to pressure. When the pressure over the crater was removed, the magma with the higher pressure suddenly went up.)

(But now, it is even degassing, so even if it started with a small eruption also, we are not expecting it to be as explosive as last year’s incident.)

Phivolcs’ Volcano Monitoring and Eruption Prediction Division (WMEPD) chief Mariton Bornas further explained that as early as March, they have assured residents around Taal that any possible explosion would not be as severe as what happened on January 12, 2020, when the volcano made a phreatic explosion that sent an ash column as high as one kilometer.

(We were saying as early as March that we are no longer expecting a scenario similar to January 2020, because number one, when Taal Volcano erupted during that time, it was a closed system which means magma is being collected below the volcano is pressurized.  That’s why when it erupted, the magma rose quickly and strongly.)

(So, we’re facing a different scenario, as the magma has been depressurized, it’s an open system as it was able to degas continuously, and it loses force, stiffening, because it no longer has the sufficient gas overpressures.)

Still, both Solidum and Bornas said the situation may change — if new magma flows upwards, to the old routes that were used by Taal Volcano in 2020.  However, Bornas said they will be able to determine if such an event would happen.

(Of course, that situation can change if Taal Volcano would have new magma rising towards the vents and channels it used during last year’s eruption.  If there is a new intrusion, then scenarios may change.)

(But as of now we have not recorded any magma movements along the vents, which we are sure to detect using our seismic network.)

According to Phivolcs’ bulletin earlier, the alert level status was increased due to the occurrence of magmatic intrusion at Taal Volcano’s main crater, which can actually lead to succeeding eruptions.

As such, the agency advised evacuating residents from high-risk barangays of Agoncillo and Laurel in Batangas.