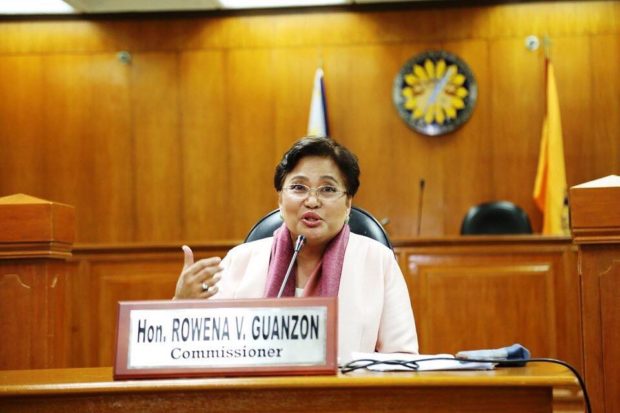 BACOLOD CITY—A Manila-based lawyer is facing charges for mocking Commissioner Rowena Guanzon of the Commission on Elections (Comelec) in his Twitter account.

The decision penned by Senior Assistant City Prosecutor Anne Montes-Española was dated May 12, but Guanzon said she received a copy of the decision only on June 25.

She said she did not know if the case had been elevated in court, although Topacio would have 10 days upon receipt of the decision to question the resolution before the Department of Justice.

In her own Twitter account, Guanzon posted the dispositive portion of the resolution and wrote: “Guess who will get a warrant of arrest soon.”

Guanzon initially filed a complaint against Topacio at the prosecutor’s office in Bacolod City on June 23, 2020, but Topacio moved to transfer the hearing of the complaint to Iloilo City due to perceived partiality.

In her complaint, Guanzon said Topacio committed several counts of cyber unjust vexation against her through Twitter.

She said Topacio launched on his Twitter account a “meme-making contest” with Guanzon, whom he referred to as “Commishunga,” as the subject of the meme and offered a cash prize of P5,000 for the winner and P3,000 as second prize.

Topacio then retweeted the meme entries to his followers, Guanzon’s complaint said.

Topacio awarded the first prize to a meme composed of Guanzon’s pictures with captions calling her numerous names.

In a 7-page resolution, Española said there was probable cause to indict Topacio for cyber unjust vexation under the Revised Penal Code and concerning the Cybercrime Prevention Act of 2012.

She said unjust vexation is defined by the Supreme Court as any human conduct, without violence, that unjustly annoys an innocent person.

“The respondent’s series of acts arose from a single criminal intent to vex and annoy Guanzon hence only one count of unjust vexation can be charged against him,” the prosecutor added.