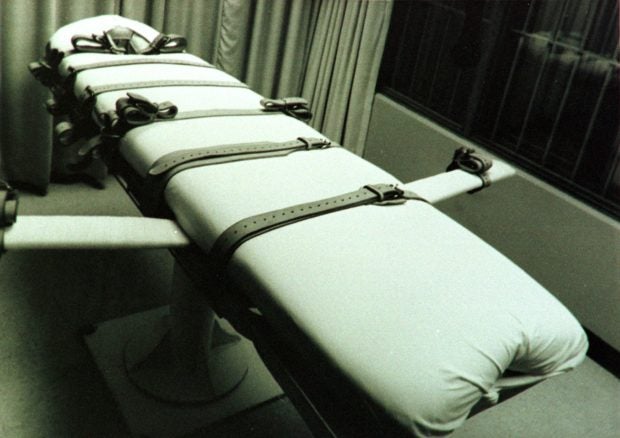 In this file photo released February 2, 1998 by the Texas Department of Corrections, shows the gurney used to execute prisoners by lethal injection in the Huntsville Unit in Huntsville, Texas. AFP

WASHINGTON — The US state of Texas on Wednesday executed a man convicted of a violent triple murder, who was the first to get a stay of execution due to the pandemic.

John Hummel, 45, received a lethal injection at the Huntsville penitentiary in the southern state and was pronounced dead at 6:49 pm local time (2349 GMT).

Hummel was handed the death penalty after he stabbed his pregnant wife and father-in-law to death in 2009, and then beat his five-year-old daughter to death with a baseball bat before setting fire to their home in Fort Worth, Texas.

According to prosecutors, he wanted to start a new life with another woman.

He was originally scheduled to be executed on March 17, 2020, but an appeals court pushed back the deadline in extremis “in light of the current health crisis.”

The court also pointed out that an execution requires “enormous resources,” including mandating that dozens of prison guards, lawyers, witnesses, and members of his family and the victims’ to be present, increasing the risk of spreading Covid-19.

As a result of the pandemic, executions were suspended for months throughout the United States.

Texas reopened its execution chamber on May 19 of this year to execute Quintin Jones, a 41-year-old man sentenced to death for the 1999 murder of his great-aunt.

Authorities set off a backlash from anti-death penalty activists when they failed to invite reporters to witness the execution, as has been customary for decades.

Since the start of the year, with the exception of Texas, only the federal government has carried out executions — three, just before former president Donald Trump left office.