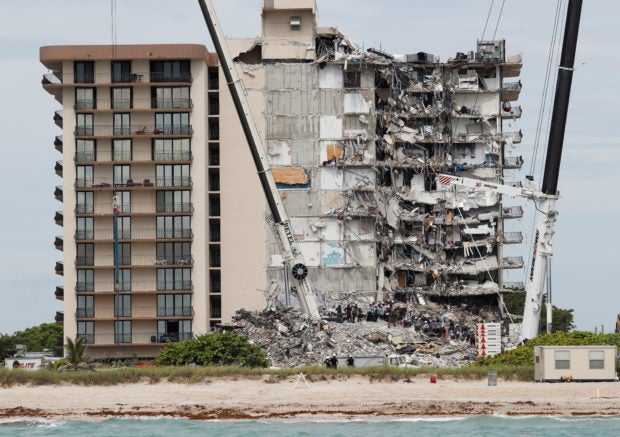 Mauriziano, like many of her neighbors in Champlain Towers East and other nearby buildings, awoke to a nightmare last Thursday. Around 1:30 am, Champlain Towers South, which sits on the same strip of beachfront as the building in which Mauriziano’s family has owned a condo for two decades, partially collapsed into a smoldering mound of twisted metal and fragmented concrete.

Mauriziano, a 20-year-old student from Chile, had stayed in a hotel since then, too frightened to re-enter Champlain Tower East until engineers had done an initial check of the building’s stability. When the experts reassured residents after inspecting the East Tower, which was built in 1994 and has different architecture from the older South Tower, she decided to return.

“In the building, it’s very silent,” she said of the East Tower, noting that she had a clear view of the rubble from her home’s once-lively pool deck. “No one goes out of their apartment. It’s very empty.”

She hopes to move into a short-term rental while rescue crews complete the search operation on her block, she said, aiming to avoid the police checkpoints around the site and escape the sadness that hangs in the air.

Since Thursday, the streets of Surfside, an upscale beachside neighborhood on Miami Beach’s barrier island, have been lined with police vehicles, blocked by orange cones and police tape, and eerily quiet. From the perimeter of the rescue operation, a block from the debris, the faint sounds of crashing waves on the beach and rescue workers drilling can be heard around the clock.

“It’s been a heavy, heavy week,” said Ayo Fanoiki, 54, who lives in a 2-story building across the street from the devastation.

As they mourn the tragedy in their backyards and cut around police tape to access their homes, Surfside residents are grappling with the decision to stay or leave.

Some said they fear for their safety, wondering if their homes could be vulnerable to the same structural failure that destroyed Champlain Towers South. Others are haunted by the deaths that occurred on their block, and the ongoing search for their neighbors trapped in the rubble.

Gillian Brill, 50, who owns a two-bedroom unit in the South Tower’s architectural twin, Champlain Towers North, was out of town when the collapse occurred, but planned to return home this weekend and assess how she feels staying there.

“Of course, I am apprehensive,” she said in a telephone interview.

The North Tower, built the same year as the South Tower, passed initial inspections in the aftermath of the South Tower’s partial collapse. Brill said she is comforted knowing her building’s board has consistently maintained the condo, including rehabilitating the balconies. Still, she said, the scene of the collapse is “heartwrenching.”

“I plan to assess the situation when I get back,” Brill said. “I have friends I can stay with if necessary.”

Authorities have not identified the cause of the South Tower’s collapse. Inquiries have focused on a 2018 engineer’s report that found structural deficiencies, and as recently as April, the condo association’s president warned residents that severe concrete damage identified by the engineer around the base of the building had since grown “significantly worse.”

“Their anxiety is not unfounded. In the United States of America, we just don’t have buildings that fall down,” he told Reuters. “We’re going to find out what happened, because there was something very, very wrong at that building.”

Fanoiki, who joined neighbors at a nighttime vigil for the victims and the missing on Surfside Beach on Monday, has remained at home, although she said the thought of her neighbors buried in the rubble was “disturbing.”

She expressed hope that the county would thoroughly examine her building’s structure to ensure its safety. It currently does not meet the criteria for the county’s ongoing audit of buildings over five floors and older than 40 years.

“It doesn’t make me so much rethink (living here) as hoping that the building codes are reexamined to make sure lives are never lost like this again,” she said.

Julio Rumbaut, a 69-year-old former television executive, packed and left his condo in Champlain Towers East with his wife on Thursday and is currently staying at a hotel. He was asleep at home the night of the South Tower collapse, and he and his wife stood outside watching in shock in the dawn hours after the building crumbled.

Several of his neighbors also left that morning, he said.

“We left because we were scared,” Rumbaut said. “And who wouldn’t be?”

He plans to move back into the condo, just not yet.

“I think it’ll be an isolated event,” he said. “But I think it will make people more careful, between this, and weather change and corrosion and everything else, about having beachfront property.”