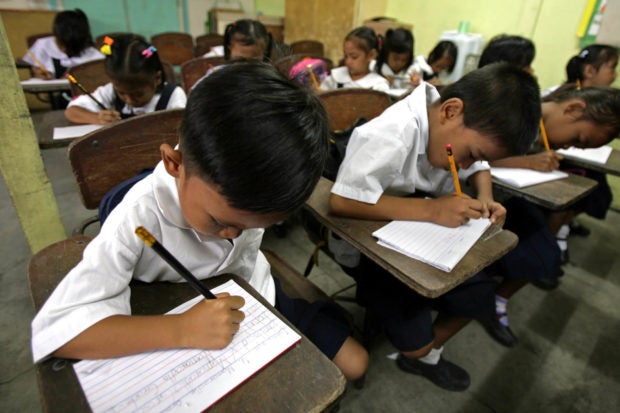 BELOW MINIMUM Across the three assessments cited by the World Bank, poor learning results were observed among students in the Philippines, with more than 80 percent of them falling below minimum levels of proficiency expected for the respective grades. —INQUIRER FILE PHOTO

MANILA, Philippines — One in every four Grade 5 students does not have the reading and mathematics skills for Grade 2 or 3, and four in every five 15-year-old students do not understand basic mathematical concepts such as fractions and decimals that should be mastered by fifth graders.

This is made worse by rampant student bullying, hunger incidence among poor households, lack of facilities and other safety issues.

Such is the sad state of education in the Philippines that emerged in three different multicountry assessments spearheaded by the World Bank (WB).

The Philippines took part in the Program for International Student Assessment (Pisa) for the first time in 2018, the Trends in International Mathematics and Science Study (TIMSS) in 2019 after a break of 16 years, and the first cycle of the Southeast Asia Primary Learning Metrics (SEA-PLM) in 2019.

Pisa assessed achievement and application of key knowledge and skills of 15-year-old students in reading, mathematics, and science. TIMSS gauged proficiency in mathematics and science at the fourth and eighth grades, while SEA-PLM evaluated reading, writing, and mathematical literacy, with an initial focus on Grade 5.

Across the three assessments, poor learning results were observed among students in the Philippines, with more than 80 percent of them falling below minimum levels of proficiency expected for the respective grades.

In all three assessments, the Philippines performed more poorly than nearly all other participating countries, ranking at or near the bottom in each learning area assessed.

“There is a crisis in education—which started pre-COVID-19, but will have been made worse by COVID-19,” the World Bank said, as “more than 80 percent of children do not know what they should know” in school.

Across the three global assessments, only 10-22 percent of Grade 4, 5, and 9 students in the Philippines posted scores “at or above minimum proficiency.”

This difficulty in achieving proficiency in the subjects taken up in school stemmed from a lack of understanding the languages in which they were taught — in the case of mathematics and science, the English language.

“Overall poor performance across grades and subjects are deeply rooted in students’ limited proficiency in the language of instruction,” the World Bank pointed out.

TIMSS showed that 45 percent or nearly every other Grade 4 student in the Philippines reported weekly bullying in their schools, or way above the average of 8 percent across the 64 participating countries.

Pisa also showed that two out of every five 15-year-old students said they had been “frequently bullied”—five times bigger than the 8-percent average in 79 countries which took the assessment.

Unfortunately, the World Bank said teachers and principals might not be fully aware of school violence as they reported relatively fewer physical fights, intimidation among students, as well as student learning hindered by intimidation or bullying, the Pisa and TIMSS results showed.

Another problem was the low “growth mindset” among Filipino students. The World Bank said only a third of students in the Philippines believed “they can become more intelligent” and develop abilities and intelligence over time.

“In Pisa 2018, the Philippines had one of the lowest proportions of students believing in a growth mindset, with only 31 percent of its students, as opposed to the OECD average of 63 percent agreeing that their intelligence could be changed,” the World Bank said, referring to the Organization for Economic Cooperation and Development grouping of developed countries.

If students had a higher growth mindset, the World Bank said they could have had a better reading performance.

The World Bank also noted students’ poor health and nutrition conditions that could have likely hindered their readiness and ability to learn.

“One in three children under the age of 5 is stunted, which is a principal marker of malnutrition,” it said. Stunted kids are smaller in height compared to healthier children of the same age.
The Washington-based multilateral lender earlier described childhood stunting due to undernutrition as a “silent pandemic” in the Philippines.

Across the East Asia and Pacific region, the Philippines had the fifth-highest stunting prevalence. Worldwide, the country was in the top 10.

Citing the 2019 TIMSS, the World Bank said more than a quarter of Grade 4 students reported arriving at school “feeling tired (33 percent) and hungry (29 percent) every day or almost every day.”