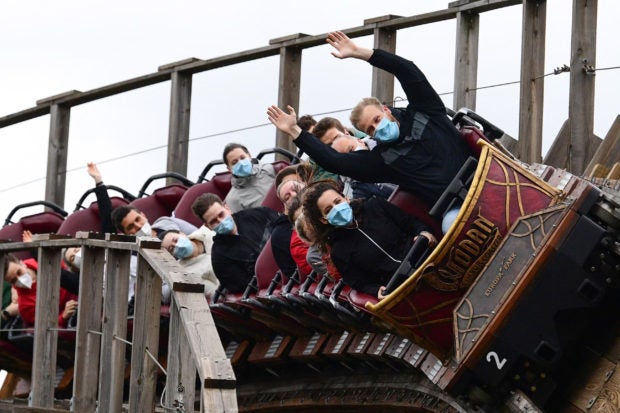 Visitors ride on a rollercoaster at Europa Park in Rust, western Germany on May 21, 2021, on the re-opening day of the centre following the lifting of coronavirus (Covid-19) restrictions. AFP FILE PHOTO

PARIS — Covid-19 infections are rising again in Europe after falling for two and a half months, mainly because of the Delta variant in the UK and Russia, according to a tally Tuesday by AFP.

The two countries have experienced not only the most new cases in Europe, but also the most rapid spread among those that have recorded more than 1,000 cases per day.

Russia has recorded 20,400 daily cases for the last seven days, or a 25 percent increase in a week, while the United Kingdom has registered 16,400 daily infections, up 70 percent, according to the tally based on official sources.

Russian and UK officials blame the Delta strain first identified in India for the vast majority of new cases.

Driven by the situation in both countries, infections in Europe are rising again, now at the rate of 56,800 new cases per day — 21 percent more than a week ago.

Between June 12-18, this measure had hit its lowest point across the continent since mid-September, when there were around 46,000 daily cases.

On the other hand the virus continues its retreat in several other countries among the worst hit since the pandemic reached Europe in January 2020.

The number of people dying is starting to rise again across Europe, although more slowly, with nearly 1,100 deaths recorded daily, around eight percent higher over the previous week.

But these numbers are still well below those reached at the height of the pandemic when more than 5,700 were dying daily in January.

Russia accounts for more than half of the new deaths recorded in Europe, with nearly 600 deaths daily on average for the last seven days — or 33 percent higher than the previous week.

In the UK, there has been a near-doubling of new deaths in two weeks, from around ten daily to 17 last week.

But the number is still far below levels during the peak in January when nearly 1,250 people died every day.