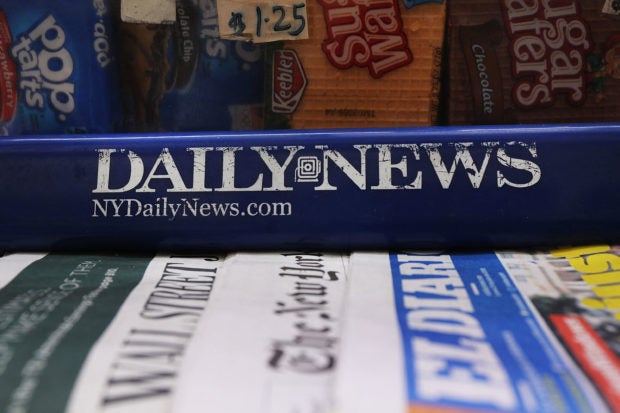 In this file photo taken on July 22, 2018 the Daily News is advertised at a newsstand in New York City. AFP FILE PHOTO

As part of its annual assessment of the media, Pew researchers found losses of some 12 percent of newsroom jobs, or some 4,000 reporters, editors or photographers in 2020, to bring total employment to 30,820 at the end of the year.

A bright spot may be that newspapers saw gains in digital subscribers and readers amid the decline in print.

Pew found “digital circulation,” which reflects the number of registered website users, paid in most cases, rose as much as 38 percent when data is combined from industry sources and the largest US dailies.

Even though the gloomy trend continued, “the decline was slower than we have seen in recent years,” said Pew researcher Mike Barthel.

The data suggests newspapers are making some progress in capturing digital subscribers — with circulation revenue topping ad revenue for the sector for the first time, according to the report.

Total estimated circulation revenue was $11.1 billion, compared with $11 billion in 2019. Advertising revenue in 2020 fell 29 percent to $8.8 billion, based on an analysis of financial statements for publicly traded newspaper companies.

The survey did not specifically ask why people turned to newspaper websites, but Barthel noted that “our previous research showed that news consumption went up as a result of the coronavirus” pandemic.

The number of unique website visitors to the top 50 daily newspapers — registered or not — rose 14 percent in the year to 13.9 million, according to the report, part of Pew’s annual “State of the Media” report.

The report comes with legacy news organizations seeing continued pressure from a decline in print readers and difficulties in generating online revenue, and with increased consolidation, as hedge funds and chains buy up struggling dailies.