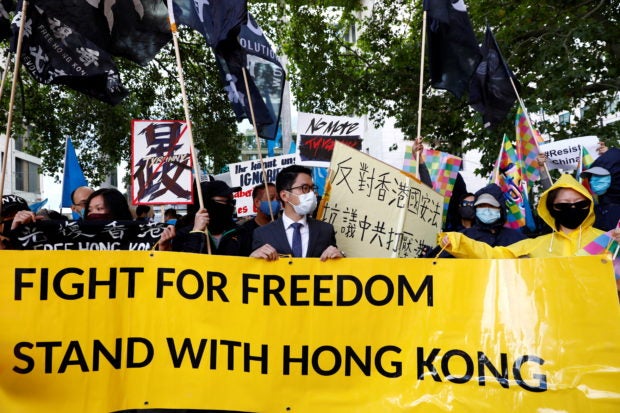 Beijing imposed a sweeping national security law in June last year that sets out punishment for anything it deems as subversion, secession, colluding with foreign forces and terrorism with up to life in prison, setting the city on a more authoritarian path.

Authorities have said the law would affect an “extremely small minority” of people and that it had restored stability after months of often-violent protests in 2019. They have said rights and freedoms in the former British colony remain protected but they are not absolute.

Most high-profile democratic politicians and activists have been arrested under the new law or for protest-related charges, or are in self-exile.

“In one year, the National Security Law has put Hong Kong on a rapid path to becoming a police state and created a human rights emergency for the people living there,” said Amnesty International’s Asia-Pacific Regional Director Yamini Mishra.

The Hong Kong government did not immediately respond to requests for comment.

Authorities have said all arrests have been lawful and no one was above the law, regardless of their occupation.

In its 47-page report, the international human rights group cited analysis of court judgements, court hearing notes and interviews with activists, concluding the legislation has been used “to carry out a wide range of human rights violations”.

Hong Kong returned to Chinese rule in 1997 with the promise of a high degree of autonomy from Beijing and that wide-ranging rights and freedoms would be protected for at least 50 years.

Mishra said the law “has infected every part of Hong Kong society and fomented a climate of fear that forces residents to think twice about what they say, what they tweet and how they live their lives”.

More than 100 people were arrested and more than 60 charged in the first year under the security law, according to a tally by Reuters.

“Hong Kong’s NSL has been used as a false pretext to curb dissent,” the rights group said, referring to the security law.