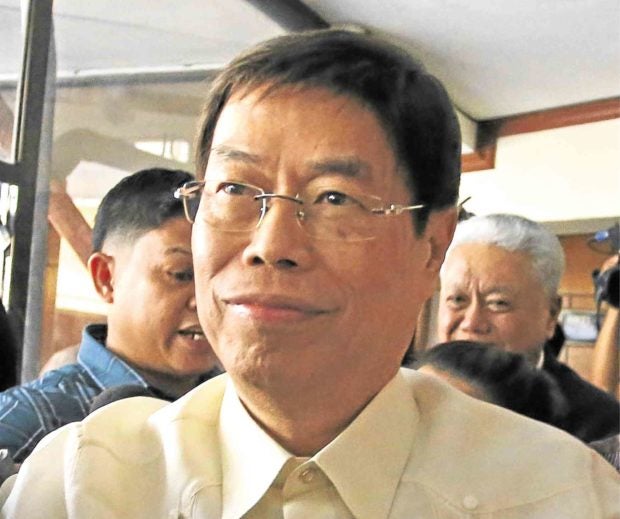 Businessman Peter Lim emerging from the NBI office in Manila in this file photo taken in July 2018 after trying to clear his name as he was told to do so by President Rodrigo Duterte. (File photo from the Philippine Daily Inquirer)

She said the campaign was bloody and harsh but only on suspects who are poor, ordinary people and those without “connections,” but it was never aimed at holding the real bigtime drug lords accountable.

“They were quick to fabricate pieces of evidence against me, while the case against Peter Lim, which is based on substantial proof, was dismissed and he was even allowed to escape. What a shame! What corruption!” De Lima said.

De Lima issued the statement from her detention cell at Camp Crame in Quezon City in reaction to an admission by Interior Secretary Eduardo Año that Lim had fled.

In a radio interview on Friday, Año said Lim “has gone missing and we believe he has snuck out of the country.”

The Department of Justice had charged Lim for conspiracy to commit illegal drug trading. The government offered a P500,000-reward for his arrest in 2018.

He was accused of supplying at least 90 kilos of shabu to the so-called Espinosa drug group in Central and Western Visayas in 2013 and 2015. His other drug deals involving an unspecified amount of shabu supposedly took place in 2014.

Espinosa was one of the state witnesses who had testified against De Lima. He said he gave up to P8 million in bribes to the senator, who was then the justice secretary, through her driver-bodyguard Ronnie Dayan.

His testimony formed part of the evidence that served as basis for the courts to find probable cause against the senator and the denial of her right to post bail.

In 2019, President Rodrigo Duterte warned the fugitive Lim to just commit suicide rather than give himself up to authorities.

De Lima had cited the case of Lim as the “real face of this d*mn drug war.”

“Where do you find a person who presents himself as seething over illegal drugs, but a drug lord is his co-wedding sponsor and campaign financier? That’s only Duterte!” she said.