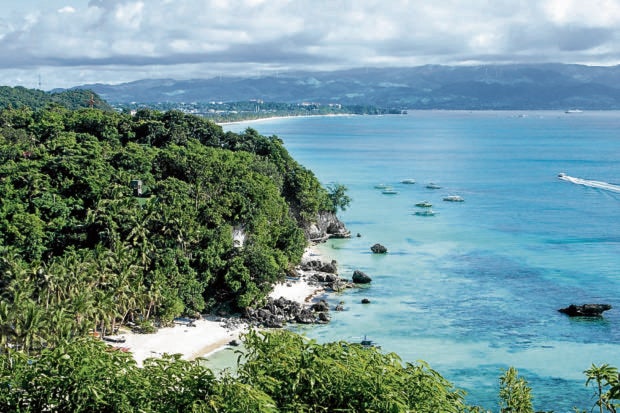 DIFFERENT VIEW Boracay, seen in this photo with the mainland of Malay town and the mountains of Aklan province in the background, has several secluded beaches, wetlands and forests that locals and the task force overseeing the island’s environmental rehabilitation want to protect. —JACK JARILLA

ILOILO CITY, Iloilo, Philippines — The creation of a government-owned and controlled corporation (GOCC) that would manage Boracay Island is contrary to the thrust of protecting the island’s environment and may allow the putting up of casinos on the island, according to government agencies.

In position papers submitted to the House committees on enterprises and privatization, and on local government, the Boracay Inter-Agency Task Force (BIATF) and agencies under it said a regulatory body, instead of a GOCC, is needed to ensure sustainable tourism.

“It is our considered opinion that GOCC’s proprietary functions would distract from its regulatory function to safeguard the island’s ecological integrity, which is the primary purpose for which the BIATF was created,” according to the BIATF chaired by Environment Secretary Roy Cimatu.

“Boracay Island is already bursting at the seams, having exceeded its carrying capacity. Thus, there is no more space for further development into an ecotourism zone,” the task force added.

The position paper was submitted to the House committees in March and recently made public by the One Boracay Movement, a group of business owners, residents and officials of Boracay Island and Malay town in Aklan province.

The two House committees on June 15 approved a substitute and consolidated bill from nine bills providing for the creation of the Boracay Island Development Authority (Bida).

The Bida is intended to replace the BIATF which was created to oversee the rehabilitation of the island when it was closed to tourists from April 26, 2018 to Oct. 2, 2018. The term of the task force was extended twice until May this year and is awaiting President Duterte’s approval of another extension.

Officials of Aklan and Malay as well as several business owners and residents are opposing the creation of Bida as a GOCC. They have displayed streamers all over the island and on the mainland of Malay to protest the approval of the committees’ report.

According to the agencies under the BIATF, the substitute bill also provides for the creation of a special economic and tourism zone, including Boracay, and empowers the Bida to undertake reclamation projects.

“The problem of Boracay is one of overdevelopment and overtourism. The carrying capacity study conducted in 2018 showed exceedance in the island’s physical carrying capacity in terms of the number of areas covered by the structures, including hotels and resorts, residential and other commercial establishments,” according to the Boracay Inter-Agency Rehabilitation Management Group which oversees the operation of the BIATF.

It also noted that under Section 8 of the substitute bill, the Bida allows gaming, amusement and recreational facilities to operate on the island subject to licensing rules of the Philippine Amusement and Gaming Corp.“[President Duterte] was clear in his pronouncement in 2018 that casinos will not be allowed in Boracay,” it said.

The planned establishment of a casino on the island earlier raised an outcry from residents and business owners who wanted to maintain Boracay as a family-oriented destination.

In the position paper of the Department of the Interior and Local Government, Undersecretary for Operations Epimaco Densing III said the Bida “should only be a regulatory body instead of a GOCC to ensure long-term sustainability of tourism and environmental protection above all else, rather than become an income-generating entity that would put Boracay at risk of exploitation and profiteering.”

“Ultimately, the consolidated House bill opens up opportunities to economic development way beyond the capacity of Boracay Island,” Densing said.

The National Economic and Development Authority noted that the Bida under the substitute bill has both regulatory and implementing functions in relation to the putting up and operation of utilities, services and infrastructure on the island.

“This may present a conflict of interest,” according to its position paper signed by Socioeconomic Planning Secretary Karl Kendrick Chua.