In a scarred Hong Kong, ‘beautiful things are gone’ 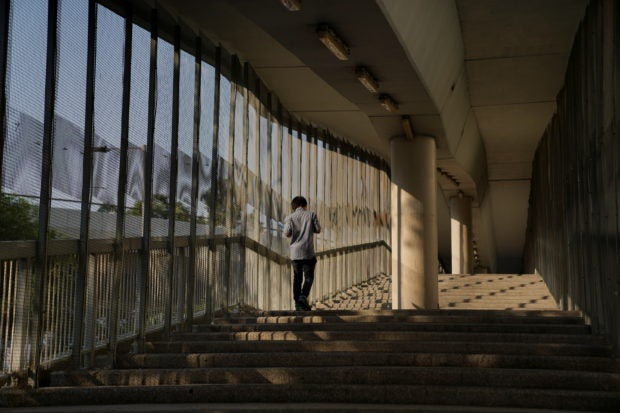 A pedestrian walks past mesh wiring covering the footbridge near the Police Headquarters in Hong Kong, China, April 23, 2021. REUTERS

HONG KONG — As documentary filmmaker Kiwi Chow walked through a pedestrian tunnel in Hong Kong on a recent day, he spotted a team of cleaners scraping off glue left by illegal ads and scrubbing the walls clean with mops.

It reminded him of the day he became an activist during the pro-democracy protests that galvanized this Chinese-ruled city in 2019. Back then, he had gathered with his young son and some friends to cover another tunnel wall with Post-it notes scribbled with political messages and drawings.

“I was very happy. It was the first time I was an organizer,” he said.

The next day, as he walked past, cleaners were removing the mosaic of notes, known in Hong Kong as “Lennon walls” after the original John Lennon Wall in communist-controlled Prague in the 1980s that was covered with graffiti, Beatles lyrics and messages of political grievance.

Urged over the phone by his wife, he collected some of the notes from the ground. “Pick as much as you can,” she told him. “Bring back the drawing by your son!”

The cleaners on that day in August 2019 told Chow that they needed to clear the tunnel wall and photograph it as proof of their work for their bosses. But then they told him that he could put the Post-its back on the other side of the tunnel.

To Chow, that was the cleaners’ act of resistance, an experience that inspired him to use his own profession for the cause.

“This is the Hong Kong spirit,” he thought, and took his camera out to film the protests. He hopes to finish editing the documentary later this year.

Clearing the Lennon Walls was the beginning of “beautiful things” being destroyed, he said.

“Of course, we feel angry when beautiful things are gone; it’s important, and we need to remember. But the anger can also transfer into perseverance,” said Chow, now 42. After all, during the protests, the Lennon wall in his tunnel was dismantled many times, but people rebuilt it.

But today, Lennon walls have disappeared. They’ve been risky to assemble since China introduced a sweeping national security law a year ago to crack down on what it deems subversion, secessionism, terrorism and collusion with foreign forces with up to life in prison.

People who want a democratic future for the city are regrouping behind an invisible front line that is harder to disrupt with tear gas and rubber bullets, but still, they say, under attack: the memory of what happened in 2019.

Democracy activists charge that those in power are trying to take control of the narrative, and they fear that future generations will hear only the government’s version of events: that the 2019 protests were illegal riots by a minority of people who were manipulated by foreign forces to undermine the rise of China under the successful leadership of the Communist Party.

Public broadcaster RTHK has removed archives containing shows covering the protests or that were critical of the government and investigating those in power, prompting online activists to move backup copies onto blockchain platforms.

Authorities have declared certain slogans and songs illegal, have removed or reframed sensitive topics in school curricula and pulled democracy books off the shelves of public libraries. Cinemas, universities and art galleries have cancelled screenings or exhibitions of protest-related works.

The Hong Kong government recently enacted new guidelines that allow authorities to censor films on the basis of safeguarding national security. “The censor should be vigilant to the portrayal, depiction or treatment of any act or activity which may amount to an offense endangering national security … and any content of a film which is objectively and reasonably capable of being perceived as endorsing, supporting, promoting, glorifying, encouraging or inciting such act or activity,” the guidelines state. 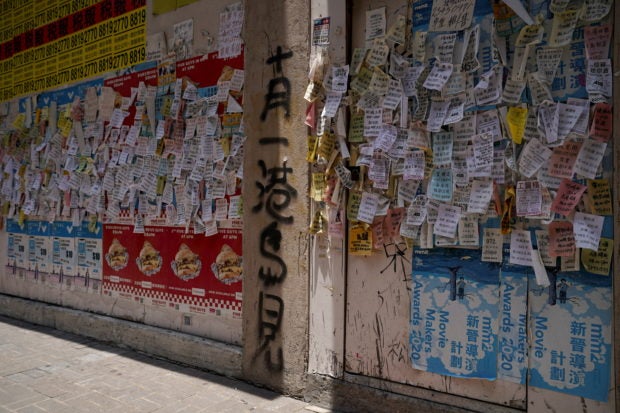 Graffiti is seen on a wall in Kwun Tong in Hong Kong, China, May 6, 2021. The graffiti reads: “See you on Hong Kong Island on October 1”. REUTERS

Chinese and local authorities deny freedoms have been curbed and say their actions are vital to defend the red line of national security, restore stability and bring prosperity.

Responding to questions from Reuters, a government spokesman said that “no civil society in the world could accept such violence and vandalism” as occurred in what he called the “riots” of 2019. The government, he said, “has no tolerance for illegal acts and strongly decries any attempt to glorify illegal acts using the excuse of freedom and democracy.”

On censorship rules, Hong Kong leader Carrie Lam said in June that her government had to strike a balance between respecting creative freedom and safeguarding national security and that officials “will discuss with the industry to allay their concerns and anxiety.”

RTHK, the broadcaster, said its new archive policy for social media platforms matches its practice for the official website, which keeps programs from the past 12 months, and that few media organizations would keep entire archives online permanently.

“We fail to see how our archive policy and arrangements for RTHK programs on YouTube are in any way relevant to your story about attempts by some people in Hong Kong to defend and preserve their version of the social event in 2019,” it said.

China’s Hong Kong and Macau Affairs Office, which comes under the State Council, or cabinet, and the Hong Kong Liaison Office, Beijing’s top representative body in the city, didn’t respond to requests for comment.

It’s not only a battle over the narrative: Since the protests died down last year, the city’s very landscape has changed, leaving familiar places unfamiliar.

Suspended footpaths that protesters used to launch petrol bombs have been covered with fences and barbed wire. Plastic, water-filled barriers surround and protect administrative buildings, forcing pedestrians to cross to the other side or walk through a narrow corridor in between the barriers and police in riot gear standing guard.

“If Hong Kong is a person, the ground is the skin. It’s like they are doing a laser surgery,” said Jade Chung, a 24-year-old freelance journalist whose work focuses on human rights and pro-democracy activists’ struggle for freedom.

Beyond the physical changes, she said that after the government started to crack down, many things became hard to say out loud. That has led to secret codes of resistance against authoritarian rule, she said.

When Chung asked for the Wi-Fi password at a tiny Hong Kong restaurant recently, she got an answer that was much more than that: 721831101.

July 21, August 31 and October 1 were three of the most violent days of the unrest in 2019, a password connecting Chung with a past she feels authorities are trying to rewrite after regaining control.

“I guess it is the only way we can express ourselves now,'” Chung said.

She wants to unlock a version of events that won’t be told in history lessons and is fading from public discourse.

“We do not want to remember, yet do not dare to forget. People do many things on the side to protect our collective memory,” said Chung, who contributed to “Road to Hong Kong,” a book about the protests. “We did not forget. We may be waiting for a chance to do something.”

In the year since the security law was introduced, minutes before the July 1 anniversary of the former British colony’s return to Chinese rule, China has also overhauled the city’s political system, demanding that anyone holding public office is “patriotic” and loyal to Beijing. Most opposition politicians and democratic activists are either in jail, ensnared by the new law or for other reasons, or in exile. 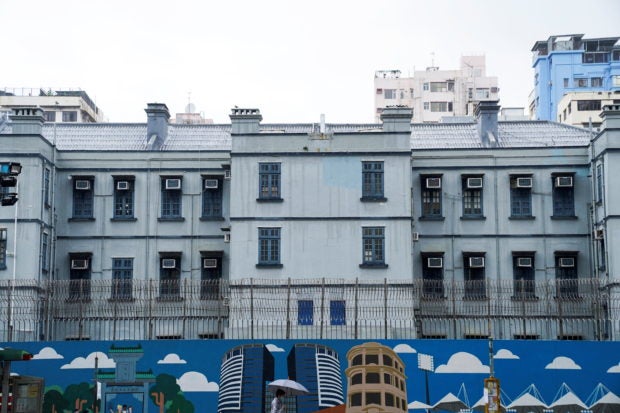 Children were given toy versions of police guns and played with them under the watchful eye of cops in riot gear, including inside a replica of a subway train carriage. To many in Hong Kong, these images were a surreal shadow play of the widely televised scenes of police officers charging onto a train on August 31, 2019, pepper-spraying and hitting cowing youngsters with batons.

Battle of the symbols

The fight with the government in the arena of symbols, words and culture is a sequel to the more chaotic battles of 2019, when petrol bombs were thrown almost on a daily basis for months on end in one of the world’s most peaceful cities, activists say.

This, too, is a battle that authorities are not shying away from.

In early May, as Herbert Chow was ordering dinner, police vans turned up at his new Chickeeduck shop in the Tsuen Wan district. At first, Chow thought authorities were there to enforce a COVID 19-related lockdown on a nearby building.

But officers wearing “national security department” vests began cordoning the area around his shop, drawing crowds of curious onlookers. They entered the shop, showed him a search warrant and began looking through the items for sale.

“It’s like they were raiding a bar to find drugs,” Chow recalled, standing near a two-meter-tall bust of a protester wearing a helmet, goggles and gas mask and holding a yellow rubber duck above his head as if he were about to throw a Molotov cocktail.

Officials have said the “Liberate Hong Kong” slogan is subversive and illegal, a claim that will be tested in coming months in a court case against a motorcycle driver arrested under the new law.

Chow’s shop also carries “Be water” beers. The product name alludes to a protest tactic of playing cat and mouse with the police to drain their resources, inspired by a quote from Hong Kong martial arts legend Bruce Lee, urging fighters to constantly adapt to the enemy.

Chow’s food puns didn’t trigger an arrest or any sanction, but the raid was enough to frighten two of his employees, who quit afterward.

“I was very angry – the scale of 1 to 10, the angry level was 9,” he said. “The remaining one was fear that they scared my colleagues and made them quit, which they did succeed at.”

Police have said officers entered the store with a court warrant after receiving a complaint that the shop was suspected of violating the national security law.

Chow said he wants his shop to become a place of hope.

“We want to tell people that we still have free space,” he said. “It’s because we see that they might change history.”

Chow, the filmmaker, said his children are literal reminders of Hong Kong’s history: His son was born in 2014, the year when protesters of the “Umbrella movement” occupied the main arteries of the financial district for 79 days; his daughter was born in 2019.