China’s ruling party censors its past as centenary nears 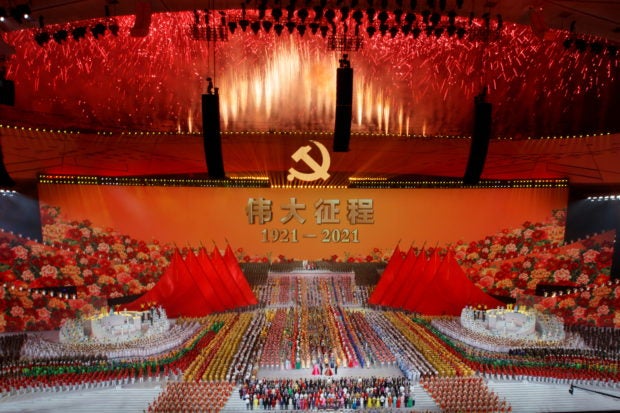 Fireworks explode during a show commemorating the 100th anniversary of the founding of the Communist Party of China at the National Stadium in Beijing, China June 28, 2021. REUTERS/Thomas Peter

SHANGHAI — At the house where Mao Zedong and 12 others met 100 years ago to found the Chinese Communist Party, President Xi Jinping recently led his politburo in reciting an oath to uphold principles and “sacrifice everything” for the party and the people.

The obscure Shanghai courtyard of 1921 is now a lavish memorial hall, a focal point as China celebrates the centenary on Thursday of the party that controls the world’s most populous nation and second-biggest economy.

The site of that first party congress now chronicles China’s “humiliation” at the hands of warlords and imperialists, its “awakening” in the early 20th century and its revival after the party’s 1949 victory in a civil war that sent Chiang Kai-shek’s nationalists into exile in Taiwan.

The commemorations in what has become an upscale neighborhood of boutiques and restaurants reflect something broader: a myth-making project to amplify China’s message at home and abroad, aligning with Xi’s call this month to tell more positive stories about China.

But even as China celebrates, it erases.

A stirring video montage highlights China’s proudest achievements, including its first atomic bomb, the construction of prestige infrastructure and the recent unmanned mission to Mars.

Ignored are the major tumults of the 20th century that historians reckon killed millions: the “Great Leap Forward” famine of 1958-1960, the decade of chaos in the “Cultural Revolution” from 1966 and the crackdown that killed hundreds or even thousands of pro-democracy activists in Tiananmen Square in 1989.

“There’s a lot of its history (the party) needs to forget,” said Robert Bickers, a historian of the party at Britain’s University of Bristol. “It has devoted a great deal of effort throughout the course of its 100 years ensuring that there is an agreed text of a history that needs to be celebrated.”

Neither the State Council Information Office nor the CCP’s Party History and Literature Research Office responded to faxed requests for comment.

The party has long sought to control history. That effort has intensified under Xi, who has spearheaded a campaign against “historical nihilism”, defined as any attempt to use the past to question the party’s leading role or the “inevitability” of Chinese socialism.

The Chinese Academy of Social Sciences has established a specialist history unit to propagate the official version of the past. This year Beijing set up a hotline for citizens to report historical nihilism to authorities.

Glenn Tiffert, a historian at the Hoover Institution at Stanford University, said this campaign reflects the party’s insecurity and is rooted in Xi’s fears that it could collapse like its Soviet counterpart, ousted in 1991.

“It seems to be a particular preoccupation of his from the very beginning,” he said. “It is part of a more systematic, integrated approach to re-establishing the authority of the party and ensuring it does not go the way of the Soviet Communist Party.”

Despite Xi’s efforts to emphasise the continuity of the party’s century-long efforts to rejuvenate China, the new memorial hall shows that the party has moved far from its roots.

While it describes its first decades as a triumph of Marxist ideas, there is no mention of the theoretical contortions that allowed the party to jettison the collectivism of the Maoist era and launch market reforms that transformed its economy into the world’s second-largest and also one of its most unequal.

A list of party “facts and figures” published by the official Shanghai Daily this month barely mentions ideology, saying the party’s mission is “to seek happiness for the Chinese people and rejuvenation for the Chinese nation”.

“It’s not about the belief in communism anymore, it’s about delivering the goods,” said Tiffert. “And in order to sustain that, they want to cover up all of the missteps.”

Yang Xuzhen, an 89-year-old visiting the memorial hall in a wheelchair, was happy to remember the party’s achievements, saying the organization she joined seven decades ago had rescued her from hard labour and servitude.

The Communist Party “has helped change so much in this country, especially for people in the countryside, the poor people and all of the minorities,” she said.