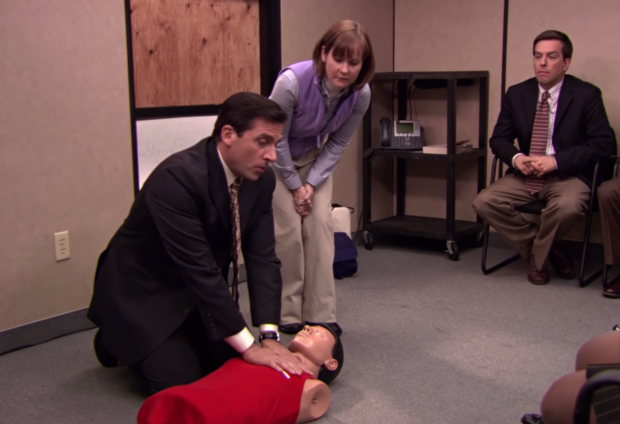 A father from Indiana, United States who did not have proper first aid training managed to save his daughter’s life after he remembered a scene from the hit sitcom “The Office.”

Matt Uber’s daughter, four-year-old Vera Posy, collapsed during a game of tag when Uber found her and provided her first aid until emergency services arrived, as reported by NBC’s “Today” last Wednesday, June 23.

Uber said he was able to perform proper chest compressions on Posy because of a first-aid technique shown in “The Office.”

He was referring to an episode from the show’s fifth season, where the characters were taught to perform CPR to the rhythm of the Bee Gees song “Stayin’ Alive.”

“When I was trying to think about what do I know about CPR, [my mind literally went] to that episode of ‘The Office,’ where they are doing CPR training and doing the compressions to the beat of ‘Stayin’ Alive,’” the father said in the interview.

Uber noted that on the day of his daughter’s accident, he was panicked and the situation felt “chaotic.” He recounted how Posy went limp and her eyes rolled back when he picked her up. The episode from the sitcom flashed back in his mind and he did chest compressions the way he recalled it from the show.

Meanwhile, his older daughter got hold of an emergency services operator who guided Uber into making sure Posy was not choking or having a seizure.

Posy was admitted to a local hospital, where doctors learned that she had calmodulinopathy, a rare condition that causes heart problems in young people. She was given an implantable device to help jolt her heart awake if she suffers a cardiac arrest.

The family said they expect Posy to experience other cardiac episodes in the future, but they hope the device that was given to her will help. Uber and his wife, Erin, have also spread awareness about the importance of CPR, saying it can “change a person’s life.”

Uber noted that CPR is “not a difficult skill” so people should take some time to learn about it.

“We know that every second, every moment that CPR was not initiated, it increased her risk of neurological damage or non-survival,” Erin stated in the report. “Don’t hold back on learning CPR.” Dana Cruz/JB