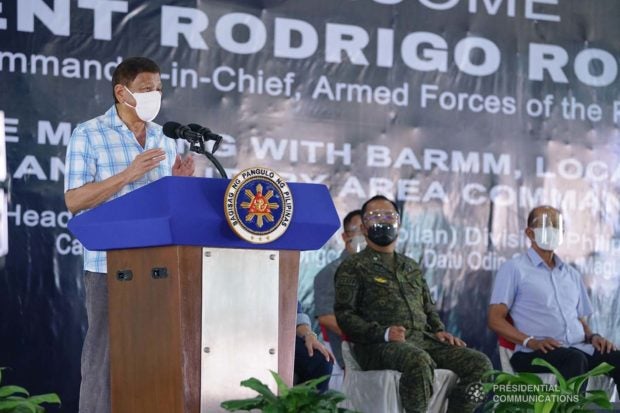 President Rodrigo Roa Duterte delivers his speech during the meeting with Bangsamoro Autonomous Region in Muslim Mindanao (BARMM), local government officials, and area commanders of the Armed Forces of the Philippines and the Philippine National Police at Camp BGen. Gonzalo H. Siongco in Datu Odin Sinsuat, Maguindanao on May 11, 2021. JOEY DALUMPINES/ PRESIDENTIAL PHOTO

MANILA, Philippines — President Rodrigo Duterte has taken a “neutral” stance and instead let Congress decide on whether to extend the Bangsamoro transition for three more years, Malacañang said Monday.

“The President po decided to become neutral and will let Congress to fully discuss the matter and to decide accordingly, respecting the plenary powers and wisdom of Congress,” presidential spokesperson Harry Roque said in a press briefing when asked about the President’s position on the matter.

(To the side that wants deferment of the elections and extends the transition, it’s hard to conduct an election because they don’t have an Omnibus Election Code at the BARMM yet and they don’t have a law for redistricting.)

(But on the side of those who want to proceed with the election, it’s important for all political leaders to have a mandate for their moral authority to lead.)

In 2019, the President appointed officials of the Bangsamoro Transition Authority (BTA) to oversee the three-year transition period of the new autonomous region.

While the BTA said it has taken significant steps in its service as an interim government, it said the three-year transition from 2019 to 2022 was not enough to accomplish its targets.