2 die after inhaling toxic gas in bathroom in S. Korea 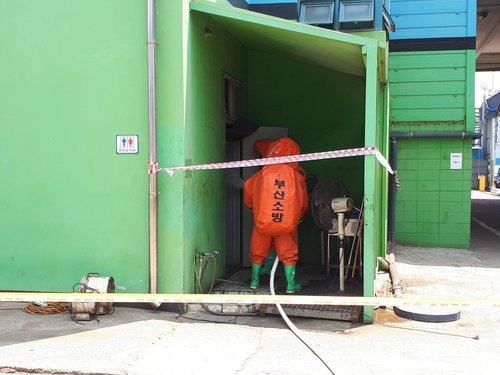 Firefighters in protective gear examine a restroom at a shipyard in the southeastern city of Busan on Saturday, in the photo provided by fire authorities there. Photo by Busan fire authorities via The Korea Herald/Asia News Network

BUSAN — Two workers have died after inhaling toxic gas in a bathroom at a shipyard in the southeastern city of Busan, police said Sunday.

The two, one of them 48 years old and the other 28, were found unconscious in the restroom at 11:04 a.m. on Saturday before being taken to a hospital.

The 48-year-old died less than an hour later and the other died Sunday.

Police said the two were believed to have inhaled hydrogen sulfide and ammonia in the bathroom.

Tests have shown that hydrogen sulfide levels there were 250 parts per million at the time, more than 16 times higher than the maximum safety level of 15 ppm, they said.

Police plan to conduct an autopsy on the two to determine the exact cause of their deaths.