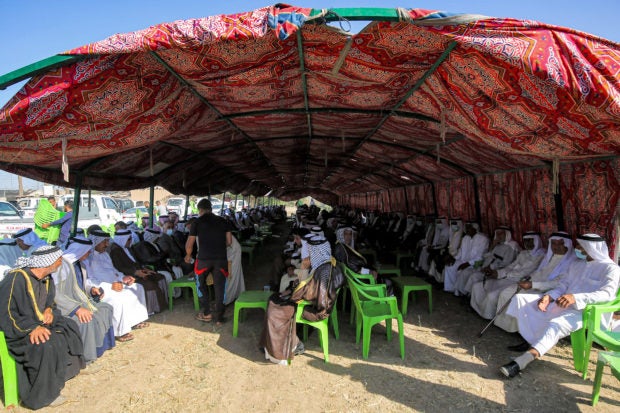 Iraqi tribal elders sheikhs gather at a funeral assembly in the Radwaniyah district, west of the capital Baghdad on September 29, 2020. – In Iraq, a war-scarred country awash with weapons, even a row over a duck or a cockerel or squabbling between nine-year-olds can degenerate into deadly tribal clashes. AFP FILE PHOTO

BAGHDAD — In Iraq, a war-scarred country awash with weapons, a row over a duck or a cockerel or even squabbling between children can degenerate into deadly tribal clashes.

Two weeks ago, a child was killed and four people wounded when two tribes traded fire with Kalashnikov assault rifles and rockets in a dispute over a 1,000-dinar ($0.68 cents) loan.

The incident in the south’s Missan province came after a nine-year-old from the Al-Faratsa tribe refused to return money he had borrowed from a friend, also nine, from the tribe Al-Bou Ali.

The debtor was slapped by the father of the lender — and then all hell broke loose.

The casualties were all passers-by, said Sattar Jabbar, who heads a non-governmental organisation that provides assistance to children.

“None of them belonged to the tribes” involved, he told AFP.

A week later, also in Missan, rival members of a tribe fought with swords because one side had insulted a religious figure venerated by the other.

In the city of Kut, in Wasit province, a duck was the source of a dispute between two women from different tribes that left a young man dead, said a local official, declining to be named for security reasons.

“They squabbled over who owned the duck and their tribes, the Al-Hassaniya and the Al-Zubeid, fired live rounds and grenades,” he said, adding that the dead man belonged to one of the tribes but had not taken part in the fighting.

Lawmaker Abbud al-Issawi blames such petty but lethal violence on the “collapse of the state in 2003” following the toppling of dictator Saddam Hussein in a US-led invasion.

The “proliferation of weapons and arms trafficking” are also to blame, said Issawi, who heads a parliamentary committee on tribal affairs.

Gun-toting Iraqis have become a feature of the country of 39 million people, experts say.

In 2017, at least 7.6 million small arms were owned by around 20 million adults, according to the Small Arms Survey organization which tracks weapons and armed violence around the globe.

But many more guns remain unregistered in Iraq, said the group.

Tribes are powerful actors in Iraq, particularly in its oil-rich south, where they have their own moral and judicial codes as well as huge caches of arms.

And when fights break out, tribal elders gather to settle the dispute, with their verdict overriding the law of the land.

Up until the ouster of Saddam, state law took precedence over tribal law.

Under federal law in post-Saddam Iraq, armed confrontations are officially considered acts of “terrorism” that carry the death penalty.

Iraq’s respected Shiite Muslim religious leadership, based in the rural south where it has many followers, has weighed in on the side of authorities.

Top cleric Grand Ayatollah Ali Sistani has said the pitched battles that often rock the south have “plunged the entire country into a spiral of instability and underdevelopment”.

But even the words of such a revered figure as Sistani appear to have fallen on deaf ears.

In the village of Bani Hashem in eastern Iraq, a football match between the Al-Freijat and Al-Rissetem tribes ended with a deadly score — one fatality and five wounded — after two players quarreled.

A tribal council met and ordered $13,000 in “blood money” be paid to the family of the dead man, a policeman with knowledge of the case told AFP.

But some tribal conflicts can run for months if not years, according to Sheikh Yaarab al-Mohammedawi, a tribal elder from the southern province of Basra.

A dispute over sewerage that has left three dead has been running for four months with no settlement in sight, he said.

“The state must control the flow of arms and society must put aside the language of weapons and adopt the culture of dialogue,” the sheikh said.

But not just yet, as apparently petty disputes continue to kill in Iraq.

In Diwaniya, a rural province known for its poultry, a rooster in heat trespassed onto a neighbor’s land in search of hens, sparking a battle in which two people died.