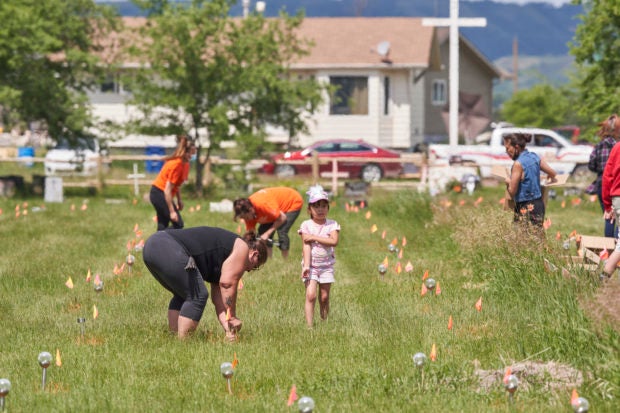 Members of the community place solar lights next to the flags which mark the spots where remains were discovered by ground penetrating radar at the site of the former Marieval Indian Residential School on the Cowessess First Nation in Saskatchewan, Canada, on June 26, 2021.  More than 750 unmarked graves have been found near a former Catholic boarding school for indigenous children in western Canada, a tribal leader said Thursday — the second such shock discovery in less than a month. (AFP)

“Both churches have been destroyed,” Sergeant Jason Bayda of the Royal Canadian Mounted Police said in a statement.

Authorities consider the two fires “suspicious, and are looking to determine any possible connection to the church fires in both Penticton and Oliver on June 21, 2021,” he said.

The Penticton and Oliver fires — about 50 kilometers (30 miles) away — are still under investigation.

The destruction of the four churches comes at a raw time for many of Canada’s indigenous peoples still struggling with the discovery, using ground-penetrating radar mapping, of the remains of 215 schoolchildren at a former residential school in Kamloops last month, and 751 more unmarked graves at another school in Marieval this week.

On Friday, Prime Minister Justin Trudeau apologized for the “harmful” government policy of indigenous assimilation applied at 139 of these schools across Canada until the 1990s, and called on Pope Francis to do the same.

Some 150,000 indigenous, Inuit and Metis youngsters were taken from their communities and forcibly enrolled at the residential schools.

Many were subjected to ill-treatment and sexual abuse, and more than 4,000 died of disease and neglect in the schools, according to a truth and reconciliation commission that concluded Canada had committed “cultural genocide.”

Read Next
Trump joins video platform Rumble ahead of Ohio rally
EDITORS' PICK
DOH: 28,471 new COVID-19 cases in PH; active cases now 284,458
On Day 2 of implementation, gov’t says workers now exempt from ‘no vax, no ride’ policy
Over 3 Million worth of prizes to be won at Smart Padala’s SENDali Manalo Promo!
Acer starts the year off strong with the Aspire Vero National Geographic Edition
Metro Manila posts lowest temperature yet this ‘amihan’ season at 19°C
Gear up and get ready to play with Yamaha Mio Gear
MOST READ
Lucky plants to grow in 2022
Derek Ramsay on being married to Ellen Adarna: ‘Gumaan ‘yung mundo ko’
Cristalle Belo on raising her kids in Australia: ‘We set limits’
Unvaccinated has rights but also has limits—DOJ
Don't miss out on the latest news and information.