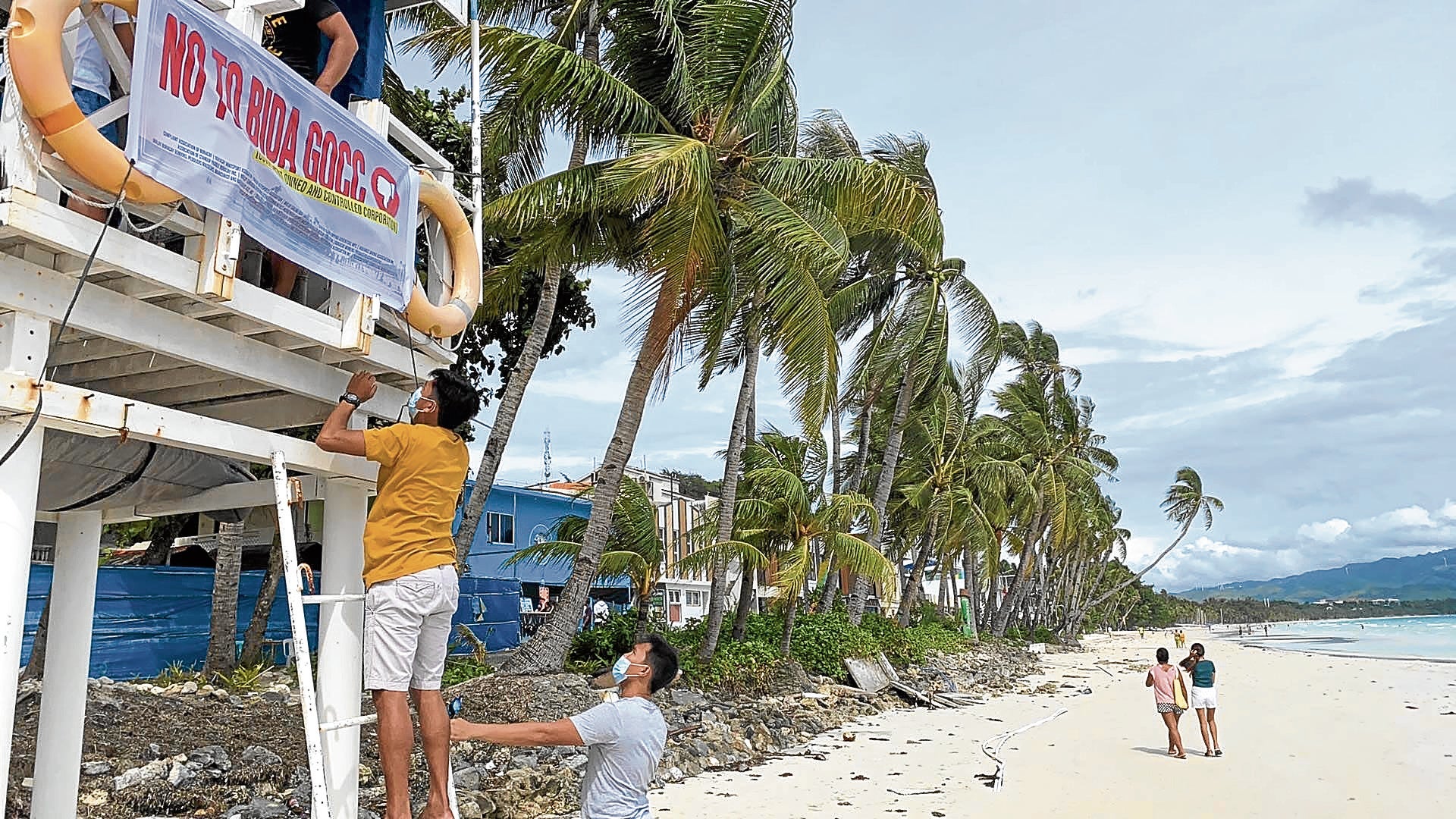 NO TO BIDA Streamers opposing the House bill creating the Boracay Island Development Authority (Bida) that will have control over the island are displayed since early this month close to the beach by a group of residents belonging to the One Boracay Movement. —PHOTO FROMONE BORACAYMOVEMENT FACEBOOK PAGE

ILOILO CITY — The municipal council of Malay in Aklan, which has jurisdiction over Boracay Island, and some islanders have condemned the approval of two House committees of a bill that would create what they saw as a government-owned and -controlled corporation (GOCC) that would manage the famous tourist haven.

The municipal council said the substitute bill that sought to create the Boracay Island Development Authority (Bida) was “a blatant disrespect to the people of the Municipality of Malay.”

The House committees on enterprises and privatization and on local government approved during their joint hearing on June 15 the committee report on the substitute bill that consolidated 10 similar bills for the creation of Bida, which would run the island and ensure its sustainable development.

While the municipal council and other officials of Aklan said they supported the creation of Bida as a regulatory body, they opposed a GOCC-type of authority envisioned in the consolidated bill.

Groups and individuals calling themselves One Boracay have also began putting up streamers on the island questioning the creation of Bida as a GOCC.

The group instead asked for the extension of the mandate of the Boracay Inter-Agency Task Force (BIATF), which was created to oversee the rehabilitation of the island when it was closed to tourists from April 26, 2018, to Oct. 2, 2018. The BIATF’s term was to end on May 8, 2020, but it was extended by President Duterte for another year, or up to May this year. The task force chaired by Environment Secretary Roy Cimatu has asked for another extension but there was no response yet from the President.

Bida is intended to replace the BIATF as a permanent body to ensure the sustainable development of the island.

Among the controversial provisions of the consolidated bill objected to by Aklan officials were those that would grant Bida power to issue business licenses and building permits and to set a limit to real property taxes that the local government could collect.

They said these provisions would violate the policy of devolution and decentralization, adding that the creation of Bida as a GOCC would be “revolting in law, in public policy, in common good and general welfare.”

The municipal council, in a resolution passed on June 17, said the creation of an “authority” that is “not duly elected directly by the citizens of Malay to govern them is anathema to the spirit of a democratic and representative government.”

“The committees involved did not even take into utmost consideration the positions of the Department of Finance, the Department of Budget and Management, and opposition to the proposed Bida bill that will effectively take over the governance and administration over Boracay Island and Barangay Caticlan,” it added.

Parañaque City Rep. Eric Olivarez, chair of the House committee on enterprise and privatization, defended the committee report, saying it was “carefully reviewed and edited to assure no diminution of the delegated powers of the local government units.”

The provisions of the bill would ensure that the economic development of the popular resort island “would not only be felt by the large investors of the world-class resorts but also by the majority of the people,” Olivarez added in a press release posted on the House of Representatives website.

Amid perennial environmental and regulatory problems plaguing the island for decades, many residents and business operators have been pushing for the creation of a management body instead of placing the popular resort island under the sole authority and management of the local governments in Aklan. INQ