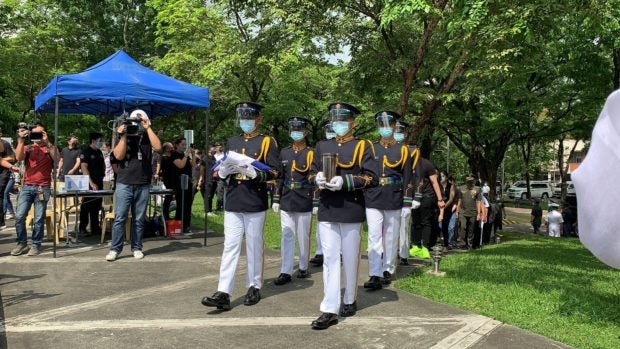 This photo shows the urn containing the ashes of former President Benigno S. Aquino III arriving at the Church of Gesu, ADMU, ahead of the scheduled public viewing on Friday, June 25, 2021. Nikka Valenzuela / Philippine Daily Inquirer

(This article has been updated to more fully describe the ceremony as well as other details.)

At around 9 a.m., an urn containing Aquino’s ashes arrived at ADMU’s Church of the Gesu.

An honor guard carries the urn containing the cremated remains of former President Benigno Aquino III, outside the…

Military honor guards escorted Aquino’s urn into the church, where mourners will be able to pay their last respects to the former statesman from 10 a.m. to 10 p.m.

According to a statement from ADMU, the public “will be allowed to walk in front of the urn to pay respects and say a prayer for PNoy for a few seconds.”

“Meanwhile, family and close friends will be allowed to stay in a sectioned-off seating area, which can accommodate up to a maximum of 140 people at any given time,” it added.

“Ateneo and the Aquino family ask that visitors cooperate with the campus personnel, to ensure that the public viewing is safe, secure, and respectful,” it further said.

Health and safety protocols will be strictly enforced as required by government regulations during this pandemic, said ADMU.

Temperature checks will be conducted and visitors will be required to wear face masks and face shields at all times and asked to fill out contact tracing forms prior to entering the church.

According to ADMU, children will not be allowed on campus unless they are part of the Aquino and Cojuangco families.

His remains will be interred in the Manila Memorial Park on Saturday, June 26, alongside his parents’ graves.

The former president’s remains were originally transported to the Heritage Memorial Park at Taguig City from the Capitol Medical Center in Quezon City.

Aquino died in his sleep on Thursday morning. His death certificate indicates that the cause of his death was renal disease secondary to diabetes. He was 61.

Aquino was the only son of democratic icons – the assassinated former Senator Benigno Aquino Jr. and former President Corazon Aquino. He was survived by sisters Ballsy, Pinky, Viel, and Kris.