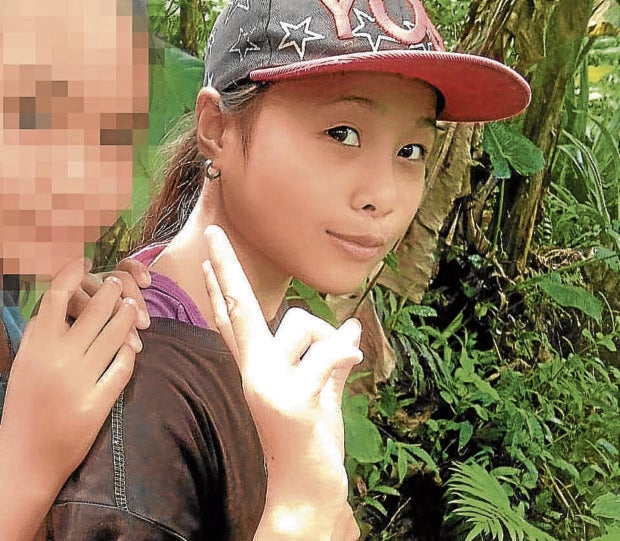 FACE OF AN ANGEL Angel Rivas takes a selfie with a friend days before she and two others were killed in Barangay Diatagon, Lianga, Surigao del Sur on June 15. —CONTRIBUTED PHOTO

MANILA, Philippines — The United Nations Children’s Fund (Unicef) on Wednesday pressed the Philippine government to bring to justice the perpetrators behind the recent “unjustifiable’’ deaths of two children in government operations.

Angel Rivas, 12, was among three members of the Manobo tribe who were fired upon and killed by government troops in Lianga town, Surigao del Sur province, on June 15 on suspicion they were communist rebels.

A fact-finding body from the Calabarzon police has identified the policemen who fired the shots that killed Helis (earlier identified in reports as Johndy Maglinte) and Dalit. Each victim had two gunshot wounds.

“Unicef mourns with the families of Johndy and Angel and joins the public in the call for a swift, thorough and independent investigation of their deaths. We urge the government to ensure that justice is served and perpetrators be held to account,” she said in a statement.

Dendevnorov reminded the Philippines of its “legal and moral obligation to promote, protect and fulfill’’ the human rights of every child as a state party to the Convention on the Rights of the Child.

“Children must be protected at all times and in all situations and their best interests must be the guiding principles in every action by government officials,” she said.

The Unicef official said a strategic plan signed between the UN Country Task Force on Monitoring and Reporting and the Armed Forces of the Philippines binds the military to prevent grave child rights violations.

The Philippine National Police, on the other hand, was poised to adopt its Child Protection Policy, which includes “the principle of respecting the rights of children to dignity and protection from degradation, humiliation, exploitation and assault,” she said.

‘Cops to be identified’

PNP chief Gen. Guillermo Eleazar said the fact-finding body had also revealed the crime laboratory’s findings that the bodies of Helis and Dalit were positive for the presence of gunshot residue after paraffin tests.

“The regional crime laboratory of police regional office 4A (RCLO4A) reported that the slugs specimen taken from the cadaver of Johndy Maglinte Helis matched with a [.45-caliber] gun submitted by one of the operatives with a rank of police senior master sergeant,” Eleazar said.

He added: “A [.45-caliber] pistol owned by a police commissioned officer also matched a bullet recovered from Dalit’s body based on the same report of the RCLO4A.”

Officials said the two policemen would be identified at the proper time.

The 10 members of the Laguna 1st district police intelligence unit involved in the June 16 operation remained under restrictive custody at the Calabarzon police headquarters.

Autopsy results showed that Helis and Dalit each had two gunshot wounds.

Police had said the two shot it out with the lawmen who were trying to serve the warrant on Dalit, said to be on the list of the Top 10 Most Wanted in Laguna.

Eleazar pointed out that the forensics findings were still insufficient to conclusively establish “whether or not there was indeed an exchange of gunfire between the police operatives and the two slain subjects.’’

“There’s a presumption of regularity in the conduct of this operation unless there are witnesses who could corroborate that there was no exchange of gunfire and that Helis was already handcuffed when he was repeatedly shot as claimed by the relatives,” Eleazar said, adding that no witness has surfaced to back the claims.

In the other case, Rivas and five others had gone to the town center in Lianga town, Surigao del Sur, when they reportedly came across some soldiers who, without warning, opened fire at them.

Rivas, her 21-year-old sister Lenie and their cousin Willy were killed, while the three others escaped unhurt.