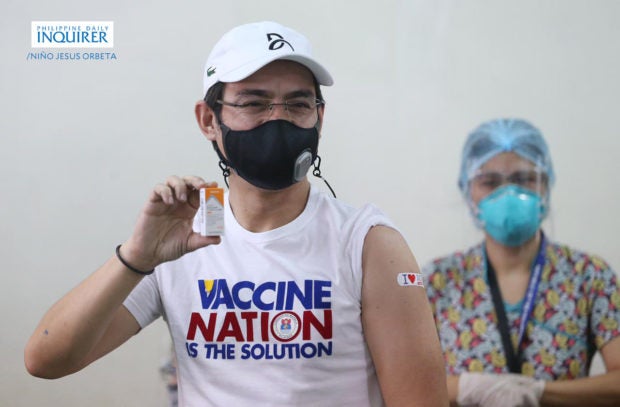 MANILA, Philippines — “Let’s jab them all!”

Manila Mayor Isko Moreno issued that directive to all of the national capital’s vaccination teams, as they once again broke the city’s own record, vaccinating 35,572 individuals in just one day when it reverted to its old “open policy.”

Moreno said he could not believe his ears on learning that the number of vaccinated individuals had reached over 35,000 in a daylong operation in 22 vaccination sites all over the city, from 6 a.m. to 8 p.m. on Tuesday, June 22.

The sites included public schools, covered courts, shopping malls. The individuals vaccinated belonged to the A1, A2, A3, A4, and A5 categories.  These are the medical frontliners, senior citizens, persons with comorbidities aged 18 to 59, economic drivers, and indigent people.

Moreno praised and thanked the members of the vaccinating teams — headed by Vice Mayor Honey Lacuna and Manila Health Department chief Dr. Arnold “Poks” Pangan — and all the personnel involved, including encoders, vaccinators, and those maintaining orderliness at the sites.

Moreno said that, at the rate things were going, the city would reach herd immunity by September this year.

This development, according to Moreno, is a clear validation that his decision to scrap the scheduling system and revert to the “open policy” that would allow walk-ins is more effective.

He once again called on everyone to avail of the free jabs, saying: “Wherever it’s convenient or near you, that’s where you go. That’s we set up more sites. What matters is you decided to get  vaccinated and get protected.”

On Monday, Moreno enforced a “no walk-in policy,” accepting in the vaccination sites only those who had been scheduled for that day after receiving some complaints about long lines.

The system, he said, proved to be a dismal failure as Lacuna reported that only less than 5,000 showed up from 6 a.m. to 4 p.m., out of the 28,000 that were texted that day for their scheduled vaccination.

Moreno, who was closely monitoring the situation, decided to lift the policy due to very low turnout, especially after learning that many stood by and waited outside the vaccinating sites in the hope of getting accommodated on seeing empty chairs.