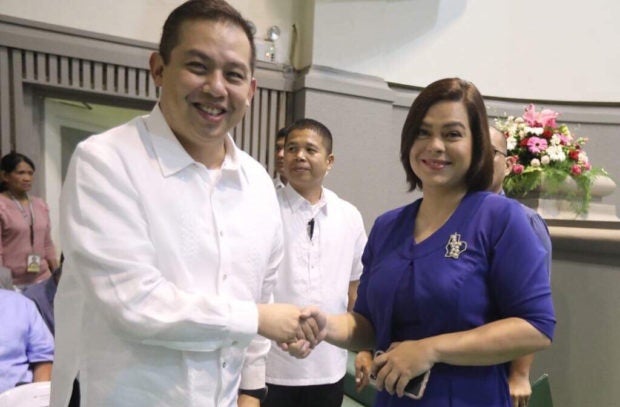 Romualdez, the president of Lakas-CMD, made the remark as he announced that the party has decided to renew its alliance agreement with Duterte-Carpio’s Hugpong ng Pagbabago (HNP). The Davao City mayor is the leader of HNP.

“If Mayor Sara Duterte decides to seek higher office for 2022, we are ready to work for her victory in the coming election,” Romualdez said.

During the Lakas-CMD’s national executive meeting on Wednesday, members of the party unanimously adopted a resolution that authorizes Romualdez to sign the renewal of their alliance agreement with the HNP for the 2022 national and local elections.

Romualdez said the alliance agreement would bind the two parties to support whoever they decide to field as a candidate for president in next year’s election.

Romualdez added that the 2022 election “will see both parties working together once more for the common good but this time, hopefully, with more political parties on board.”

“Lakas-CMD believes that Hugpong ng Pagbabago shares the same vision of a strong Republic through the sustainable economic growth and development of the regions,” the resolution read.

To recall, the Lakas-CMD previously signed an alliance agreement with HNP on November 7, 2018, which paved the way for their partnership in the 2019 national and local elections.

No decision on vice presidency yet

Romualdez likewise said that he has yet to decide on whether or not he will pursue a vice-presidential run in next year’s elections.

President Rodrigo Duterte earlier said he wouldn’t run for vice president in the 2022 elections should Romualdez vie for the post.

Duterte said he made the promise to Romualdez when he faced off against several others for the position of House speaker in 2020.

“Well pinag-iispan natin ng husto, we are very much in deep consideration of this opportunity to vie for the 2nd highest position in the land,” Romualdez said.

“It would be done with consultations… from the province of Leyte of course with our party members, I will rely heavily on that,” he added.

Romualdez added that Lakas-CMD has also yet to discuss its line-up for the 2022 elections.