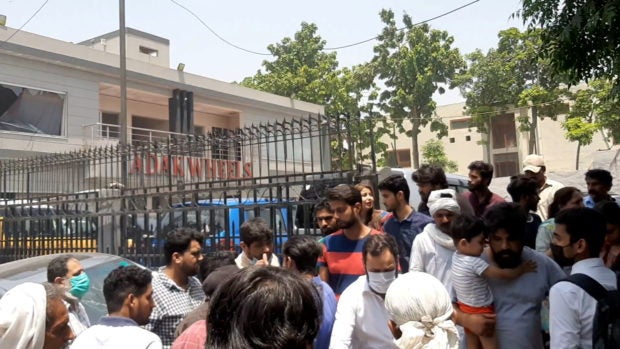 People gather outside a damaged auto shop after a deadly explosion in Lahore, Pakistan June 23, 2021, in this still image taken from a social media video. @Usama7561/Sheikh Muhammad Usama via REUTERS THIS IMAGE HAS BEEN SUPPLIED BY A THIRD PARTY. MANDATORY CREDIT. NO RESALES. NO ARCHIVES

LAHORE, Pakistan — A blast in the eastern Pakistani city of Lahore killed two people and wounded 14 others on Wednesday, police said, adding that they had yet to determine whether the explosion in a residential neighbourhood was caused by a bomb.

“Our investigators and officials from bomb disposal squad are working to find out any clue to what exactly happened,” city police chief Ghulam Mahmood Dogar told reporters.

There was no claim of responsibility. Islamist militant groups have been trying to make a comeback following Pakistani army offensives in their sanctuaries along the Afghan border, but urban areas like Lahore have been largely spared from the recent violence.