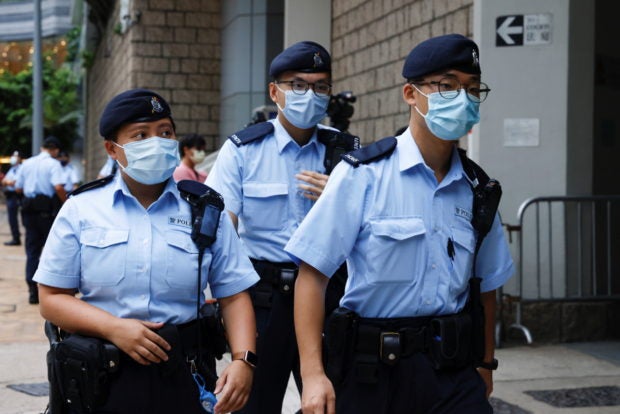 HONG KONG — The trial of the first person charged under the national security law in Hong Kong begins on Wednesday, almost a year after he was charged with driving his motorbike into officers during a rally while carrying a flag with a protest slogan.

The case of Tong Ying-kit is seen as a departure from Hong Kong’s common law traditions, as he was denied bail and a jury, and a test of the government’s claim that the slogan “Liberate Hong Kong! Revolution of our times” is secessionist.

Tong, 24, was arrested on July 1, 2020, hours after the enactment of the national security law, which punishes what China deems as subversion, secessionism, terrorism and collusion with foreign forces with up to life in prison.

Tong faces charges of terrorism and inciting secession, as well as an alternative charge of dangerous driving causing grievous bodily harm, which can lead to up to seven years in prison.

Tong has been denied bail. Hong Kong’s common law has traditionally allowed defendants to seek release unless prosecutors can show lawful grounds for their detention. Under the new law, the burden is now placed on the defendant to prove they will not break the law if released on bail.

On Tuesday, the Court of Appeal upheld a decision to deny Tong a trial by jury, citing a threat to the personal safety of jurors and their family members.

His trial will be held by a panel of three judges instead: Esther Toh, Anthea Pang and Wilson Chan.

Hong Kong’s Judiciary describes trial by jury as one of the most important features of the city’s legal system, a common law tradition designed to offer defendants additional protection against the possibility of authorities overreaching their power.

Article 46 of the security law – drafted by Beijing, where courts are controlled by the Communist Party and conviction rates are close to 100% – states three instances in which juries can be scrapped: protecting state secrets, cases involving foreign forces and protecting jurors’ safety.