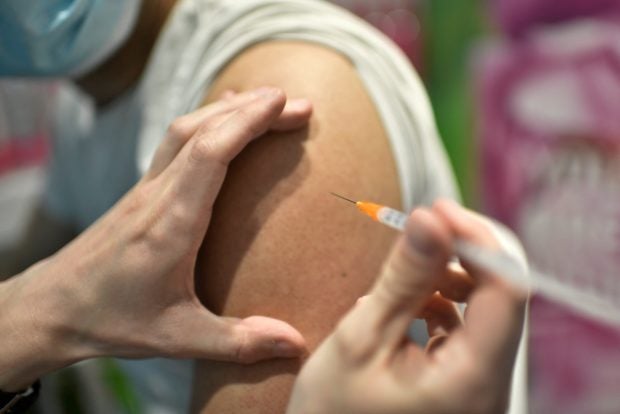 FILE PHOTO: A pharmacist makes an injection of a COVID-19 vaccine on June, 4, 2021. (Photo by STEPHANE DE SAKUTIN / AFP)

MANILA, Philippines — Some senators on Tuesday questioned President Rodrigo Duterte’s threat of arrest versus people refusing to get inoculated against the COVID-19 disease.

“If one refuses inoculation, what law did he/she violate?” Senate President Vicente Sotto III said in a tweet.

If one refuses inoculation, what law did he/she violate?

“There are many ways of convincing our people to undergo vaccination without resorting to unlawful actions,” he added in a separate message to reporters when sought for comment on Duterte’s admonishment.

In his weekly Monday night briefing, Duterte warned of having those who decline COVID-19 vaccination arrested.

“If you don’t want to get vaccinated, I will have you arrested. And I will inject the vaccine in your butt. [CURSES]. You are pests. We are already suffering and you’re adding to the burden,” the nation’s top leader said, speaking partly in Filipino.

READ: Those who refuse to get vaccinated vs COVID-19 may be arrested, Duterte warns

Senator Risa Hontiveros, in an INQside Look interview, said threats and making arrests will not flatten the COVID-19 curve in the country.

(Not threats, not arrests will flatten the COVID-19 curve here in the Philippines, especially now with the new Delta variant. I have been saying from the start that this is a public health crisis so a public health approach would be effective.)

(You should not threaten, you should not arrest our fellow Filipinos who are hesitant to get vaccinated. Instead, we should do every step we can to increase the public’s vaccine confidence.)

To do this, she stressed the need to ramp up the information campaign of the Department of Health and to ensure there would no longer be delays in the arrival of vaccines to the country.

“So maglikha tayo ng (let’s create a) conducive environment so majority of us Filipinos ay makapagpabakuna talaga (will really get vaccinated),” Hontiveros said.

Senator Joel Villanueva, for his part, said he favors educating the public on the importance of vaccination instead of penalizing individuals who opt not to get the COVID-19 shots.

(To be honest, I can’t think of any violation that can be imposed on those who do not want to be vaccinated. Education about the vaccine is still key. With all due respect, we can probably talk about penalties if we already have a surplus of vaccines. Until now, there are a lot of people who want to get vaccinated but are not able to do so.)

(If we have a lot of vaccines, there’s a surplus of doses, then we can copy the LGUs that give prizes for those vaccinated, instead of punishment. If cash-strapped local governments have found creative ways to market the vaccines, then the national government with far more resources can do more.)

Senator Nancy Binay, meanwhile, pointed to the issue of vaccine supply as the “biggest problem” in the COVID-19 inoculation drive of the government.

Senator Francis Pangilinan, on the other hand, said solutions to the pandemic should not impose fear on the public but should be based on science.

READ: Pangilinan says science-based solution is needed vs COVID, not fear based or arrest