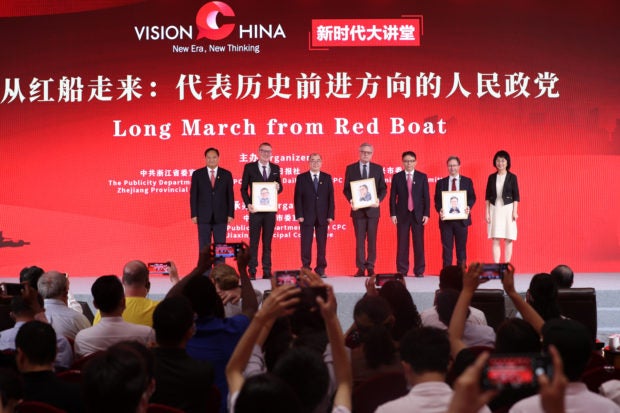 Officials and global observers underlined the importance of understanding the Communist Party of China, especially its history, after the Party led the Chinese people to achieve unprecedented success in various fields, including COVID-19 control and poverty alleviation, during its centennial journey.

Addressing the Vision China event organized by China Daily on Sunday in Jiaxing, East China’s Zhejiang province, Zhu Guoxian, head of the Publicity Department of the CPC Zhejiang Provincial Committee, said the Party has stood the test of history over the past 100 years and has written a spectacular chapter in the development of the Chinese nation and progress of human society.

The fact that the Party has grown from a small party of some 50 members into the world’s largest ruling party with more than 91 million members, shows the advanced nature of the CPC, Zhu said.

In 1921, the CPC’s founders convened the first National Congress of the CPC and announced the Party’s founding on a small boat, which was later referred as the Red Boat, on Nanhu Lake in Jiaxing.

Sunday’s event with the theme, “Long March from the Red Boat”, was held 10 days ahead of the 100th anniversary of the CPC’s founding.

Zhou Shuchun, publisher and editor-in-chief of China Daily, said it was a move to look back at the Party’s history and forward to the future.

Starting from Jiaxing, the CPC has been uniting and leading people on a great journey through brambles and thorns to save and revitalize the Chinese nation, he said.

“To understand today’s CPC, we need to start from the Red Boat again. Without the CPC, there would be no new China, and one cannot read and understand China without knowing and understanding the CPC,” Zhou said.

Launched in 2018 by China Daily, Vision China invites political, business and academic speakers to tell China’s story from a global perspective and discuss major China-related topics of international interest. Prior to this event, the talks had been held 19 times in places like Beijing, New York and London.