Their destruction comes weeks after unmarked graves of 215 children were found in nearby Kamloops at one of many boarding schools set up a century ago to forcibly assimilate Canada’s indigenous peoples.

The discovery at the Kamloops Indian Residential School shocked Canadians, and renewed calls for Pope Francis to apologize for abuses at the schools run by the church on behalf of the federal government. 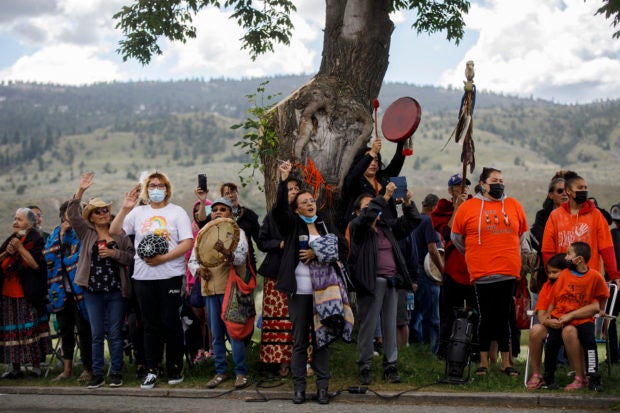 In this file photo people react as a convoy of truckers and other vehicles travel in front of the former Kamloops Indian Residential School in support of the Tk’emlups te Secwepemc people after the remains of 215 children were discovered buried near the facility, in Kamloops, Canada, on June 5, 2021. AFP

Sergeant Jason Bayda said the Royal Canadian Mounted Police is investigating the two fires. “Both churches burned to the ground and police are treating the fires as suspicious,” he said.

Although too early to conclude arson, he added, “We are sensitive to the recent events” in Kamloops.

Earlier, Bob Graham, chief of the volunteer fire department in Oliver, British Columbia, told public broadcaster CBC, “We believe by looking at the scene and the surroundings, that there was a liquid accelerant used.”

“Early indications are that it was set,” he said of the St. Gregory’s Church blaze, adding that the wooden church was completely gutted.

“It’s hoped that they will find something that they can use to determine the cause and maybe who’s responsible,” he told CBC.

Some 150,000 indigenous, Inuit and Metis youngsters were taken from their communities and enrolled at Canada’s residential schools, where students were physically and sexually abused by headmasters and teachers who stripped them of their culture and language.

Today those experiences are blamed for a high incidence of poverty, alcoholism and domestic violence, as well as high suicide rates, in Canada’s indigenous communities.

“There’s a lot of anger in every indigenous community across Canada after those 215 innocent children’s graves were discovered,” Gabriel commented.

“I’m not saying this may be the cause of our church going up in flames,” he said, “But there’s a lot of anger.”