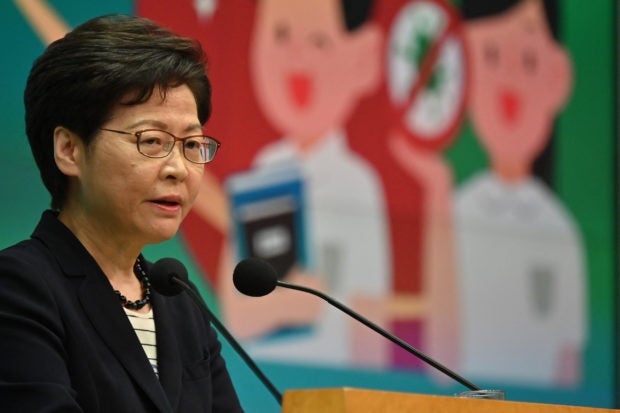 HONG KONG — Media outlets in Hong Kong must not “subvert” the government, the city’s leader said Tuesday, rejecting US criticism of recent action against a pro-democracy newspaper under a powerful new security law.

Two of the paper’s executives were charged with “collusion”, a national security crime, over what police said were articles calling for international sanctions against China and Hong Kong’s leaders.

“It’s not a problem to criticize the Hong Kong government, but if there is an intent to organize activities to incite the subversion of the government then that is, of course, a different thing,” Chief Executive Carrie Lam said when asked about Apple Daily and press freedom in the city.

“Media friends should have the ability to distinguish between them,” she added during her weekly press conference.

Unlike mainland China, where the press is overwhelmingly state-owned and heavily censored, semi-autonomous Hong Kong has free speech protections baked into its mini-constitution.

But an ongoing campaign by China to root out dissent after huge and often violent democracy protests in 2019 has deepened unease over the business hub’s future.

The new security law has criminalized a host of political views and the action against Apple Daily has left the media wondering what opinions or reporting could trigger an investigation.

Echoing other officials, Lam said the prosecution of Apple Daily was not an attack on “normal journalistic work” and that the paper was trying to undermine China’s national security with its coverage.

When asked by a reporter what the government’s definition of normal journalistic work was, she replied: “I think you are in a better position to answer that question.”

The United States was among multiple Western nations that criticized the police operation against Apple Daily, saying it undermined press freedoms as well as Hong Kong’s reputation as a safe place to do business.

“Don’t try to accuse the Hong Kong authorities of using the national security law as a tool to suppress the media, or to stifle the freedom of expression,” she said.

“All those accusations made by the US government, I’m afraid, are wrong.”

Apple Daily has long been a thorn in Beijing’s side, with unapologetic support for the city’s pro-democracy movement and caustic criticism of China’s authoritarian leaders.

The arrests and asset freeze last week have crippled its ability to continue operations.

Board members of the paper’s parent group Next Digital have asked Hong Kong’s Security Bureau to unfreeze some of its assets so it can pay staff.

If that does not happen, the paper said it will cease publishing with a final print date to be announced on Friday.

Resignations have already begun and some of the paper’s sections have gone silent in the last 24 hours.

On Monday night, the anchor of an Apply Daily online evening show announced it was her final broadcast.

The paper’s financial news desk and its English edition also announced they would cease publication.