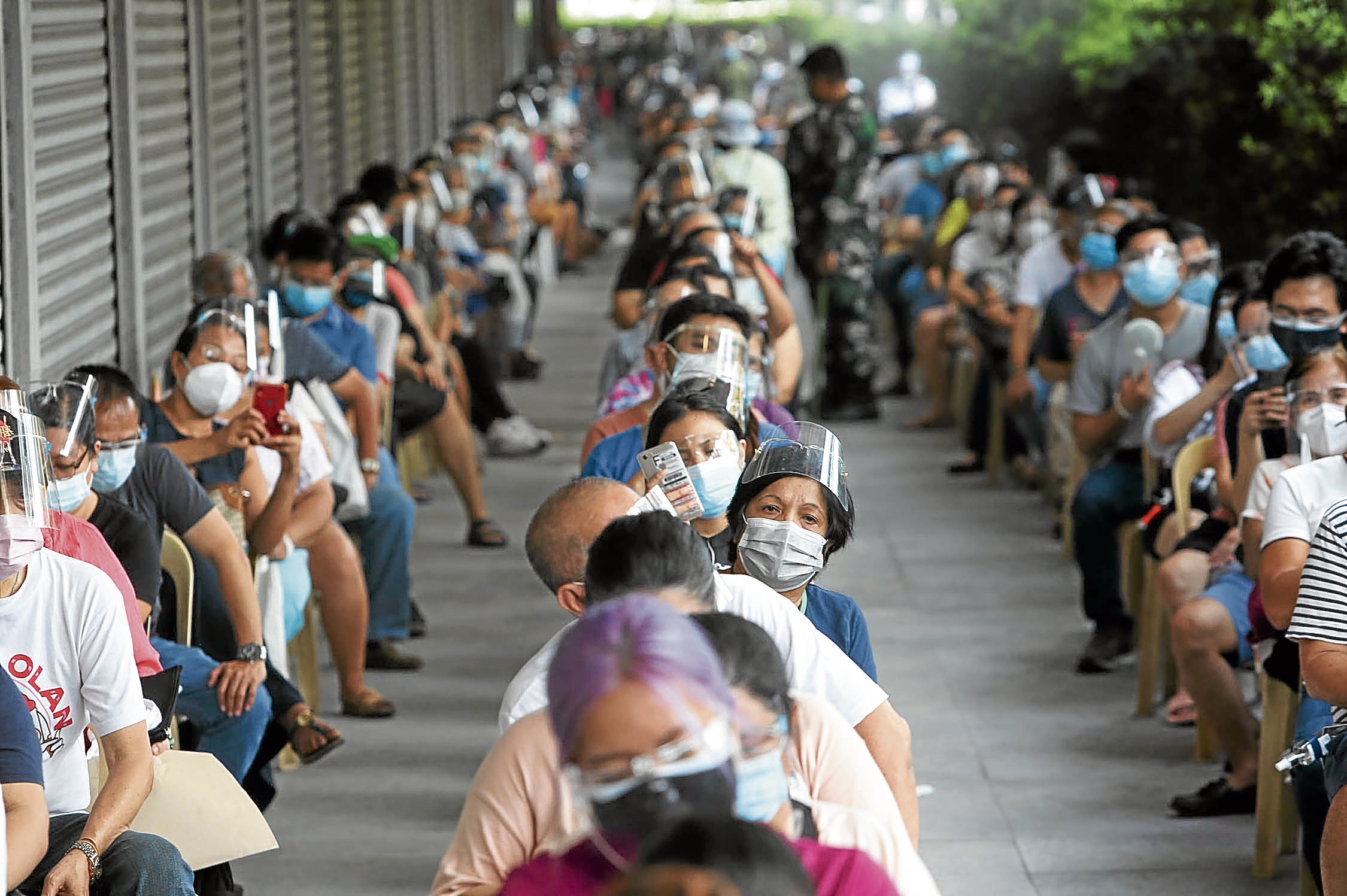 CROWD DRAWER Vaccination sites offering the US-made Pfizer jabs are drawing large crowds, such as this one outside the Prince Hotel in Ermita, Manila. Authorities have warned against potential superspreader events as the government ramps up the rollout of vaccines. INQUIRER file photo / MARIANNE BERMUDEZ

The COVID-19 pandemic isn’t just killing millions of people around the world, but has also laid out a treasure map that is now allowing a select group of international investors and companies to make a killing out of the killer virus that causes the yet incurable disease.

In the Philippines, vaccine suppliers stand to earn more than $1 billion in gross sales, the amount earmarked for vaccine purchase by the government, in 2021 alone.

Worldwide, estimates place the income pie that vaccine makers and suppliers will slice up and divide among themselves at $100 billion gross also in 2021. Profits are estimated to reach at least $26 billion. 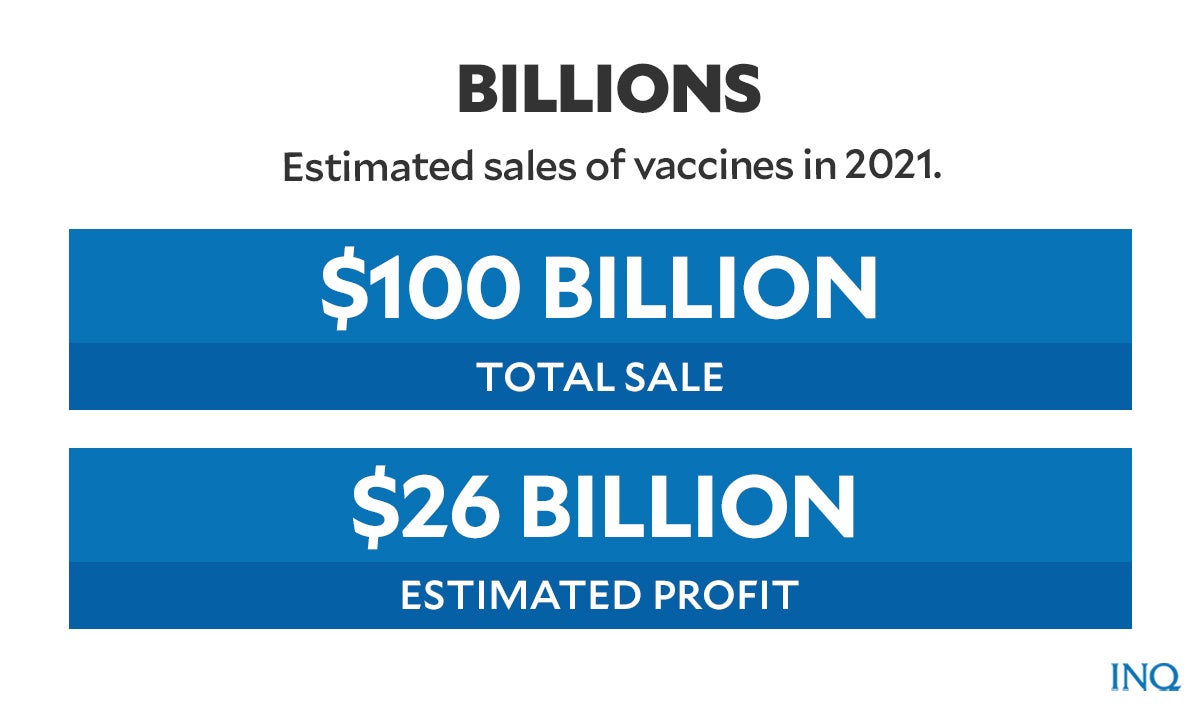 That the growth in sales of pharmaceutical companies is directly proportional to the desperation of governments around the world to acquire protection against coronavirus for their populations is not a mystery.

What is mysterious is the refusal of these companies to be transparent about one variable that would make it clear how much money their products would extract from countries that have as much need for coronavirus immunity but not as much resource to spend on it—vaccine costs.

At the recent Philippine Senate committee of the whole hearing on the government’s pandemic response, health and finance officials were pressed by senators to reveal the prices that Filipino taxpayers pay for vaccines acquired by the government.

Finance Secretary Carlos Dominguez III gave the closest answer—a range of $6.75 to $27.59 per dose. Non-disclosure agreements with vaccine manufacturers prevent Philippine officials from revealing how much each vaccine brand cost, according to Dominguez. 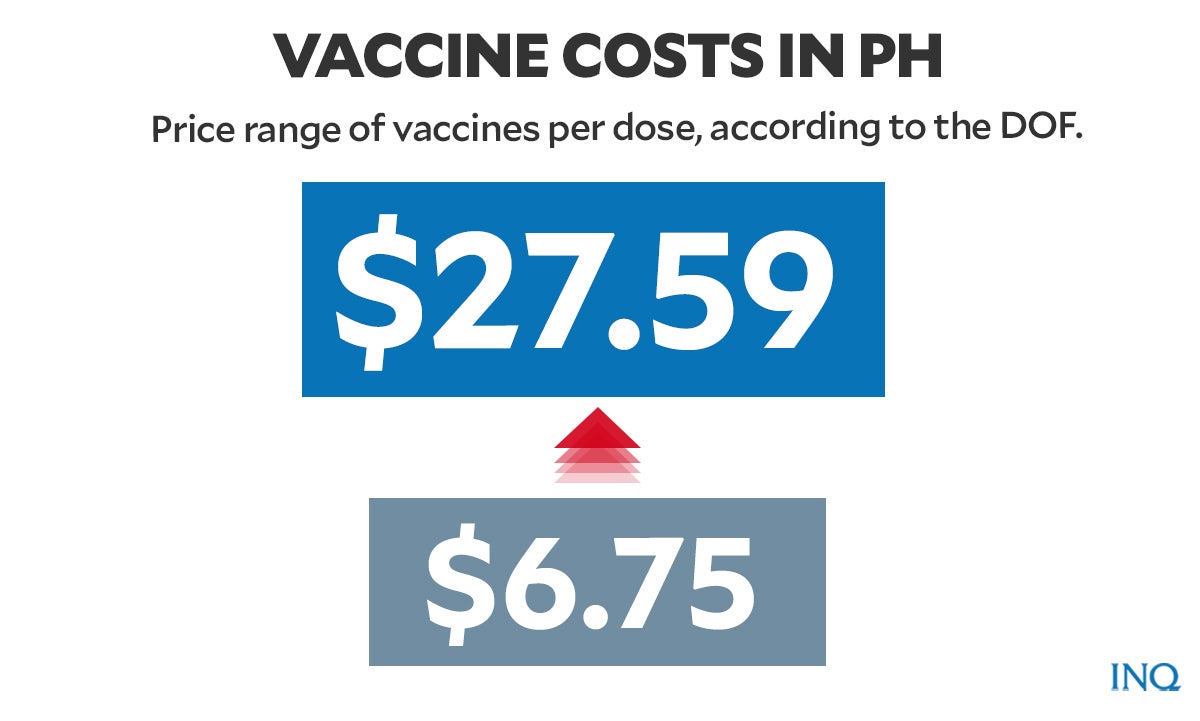 Frustrated, senators asked that the numbers be revealed in a closed door session to remain confidential at least for the time being. But the conundrum that Dominguez found himself in under questioning by the Senate was not unique in the Philippines.

Governments worldwide, rich or poor, had been forced to enter into nondisclosure agreements with vaccine makers in a desperate race to acquire the coronavirus protection that the biotech products offer.

Prices are commonly redacted in vaccine supply contracts between government and manufacturer as costs are considered a trade secret.

But while the world largely knows nothing about how much the pharmaceutical companies are charging per vaccine dose, it has been given a glimpse of the kind of wealth that these companies and investors are accumulating in these desperate times.

The treasure that the pandemic unlocked for investors or owners of pharmaceutical firms was too shiny to hide in the dark.

According to the poverty-eradication advocacy group Oxfam, profits from the pandemic created at least nine new billionaires just as disease prevention measures were killing the jobs and income of hundreds of millions of people.

The wealth accumulation was largely because of “excessive profits pharmaceutical corporations with monopolies on COVID vaccines are making,” Oxfam said in a report last May on its website. 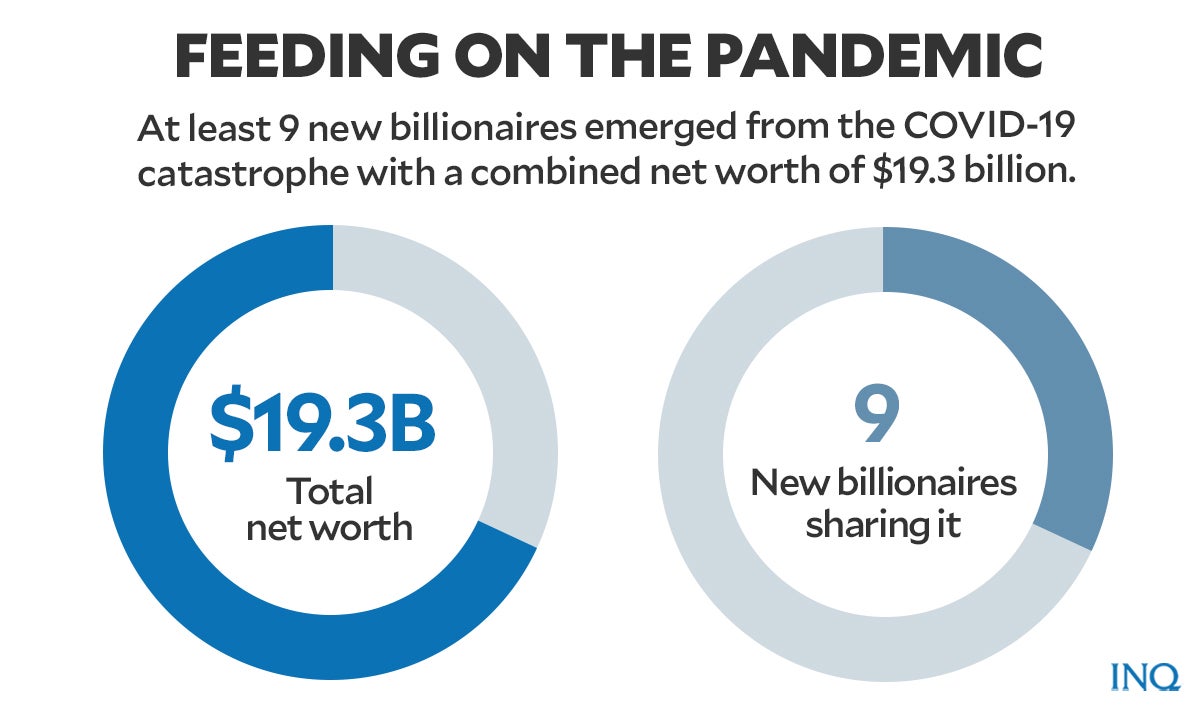 NPR in its report, listed estimates of average prices per dose of AstraZeneca that some countries and organizations are paying to show disparities in just one brand: 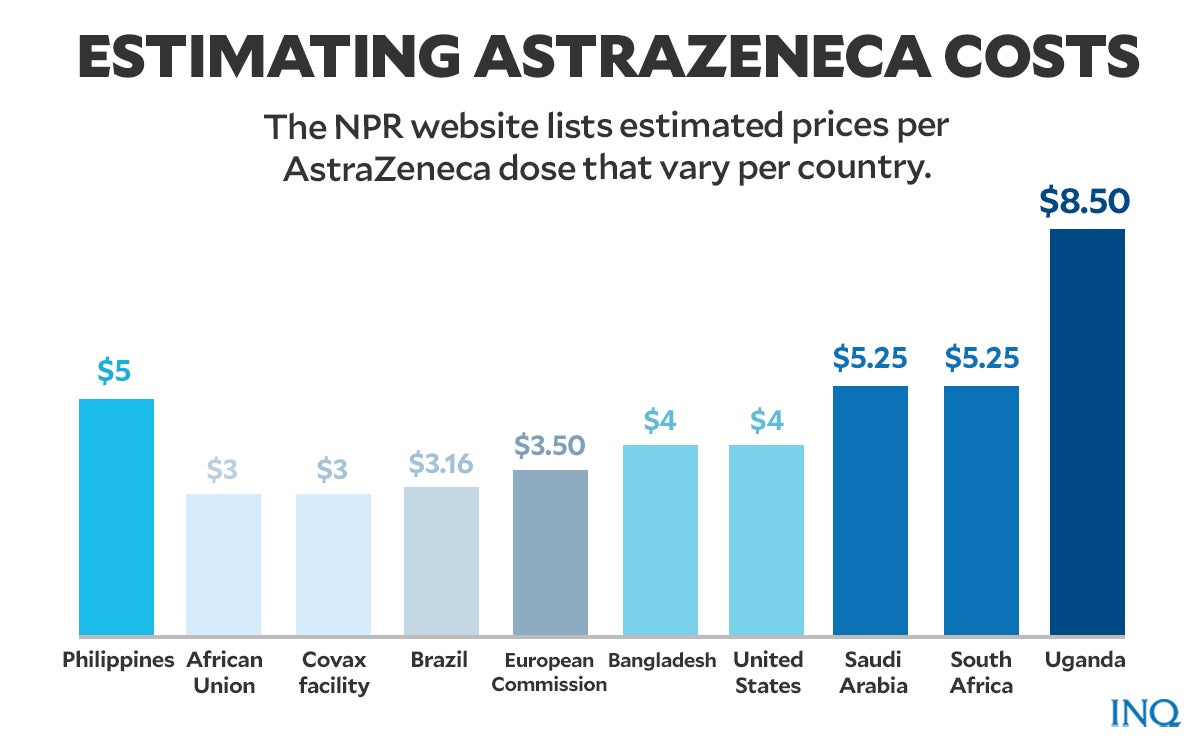 “In an ideal world, the price of a vial of vaccine would be consistent across the globe,” said the NPR report.

But there would be no ideal world when it comes to profiting from a global health catastrophe.

The NPR report said even vaccines that have not yet been authorized for use fetch prices that are higher in poorer countries. 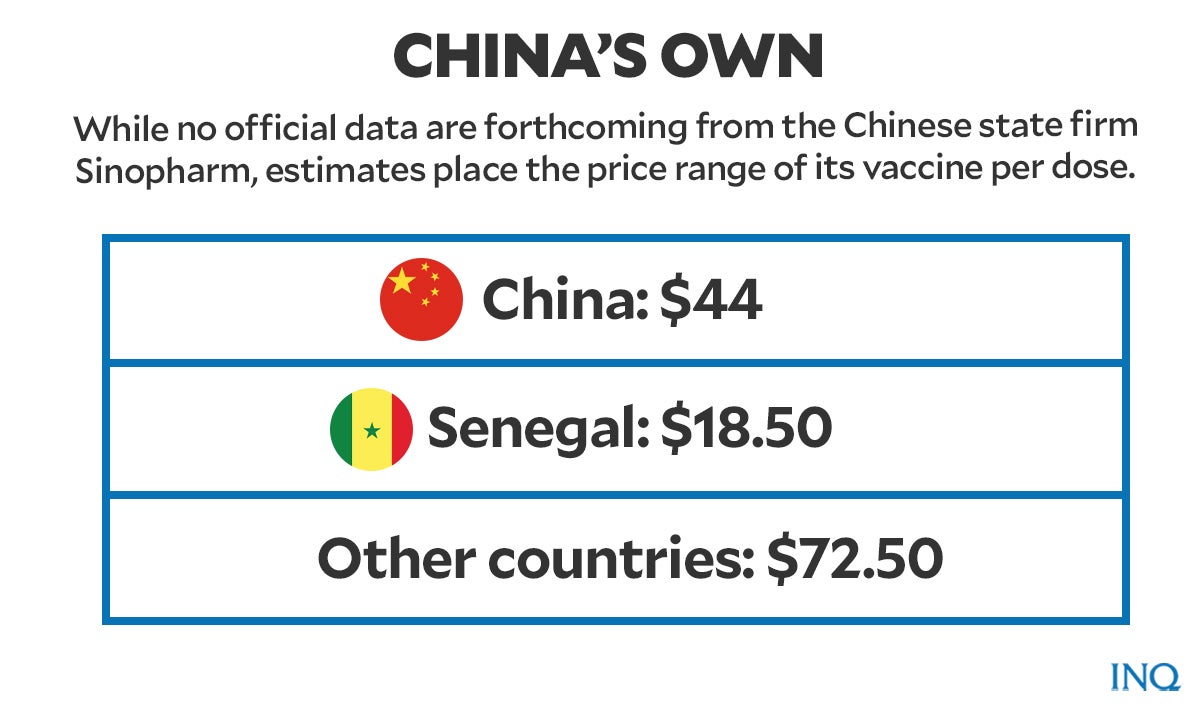 One of these was the vaccine produced by Chinese state company Sinopharm, which became controversial in the Philippines after presidential guards and President Rodrigo Duterte himself were injected with it prior to emergency use authorization (EUA) by Philippine government health regulators.

Duterte, piqued at criticisms he flaunted the rules on vaccine use, ordered the return of an unspecified amount of Sinopharm vaccines supposedly donated by China.

How much each dose of Sinopharm cost was likely to remain a secret in the Philippines, which had given the Chinese vaccine an EUA days after the Philippine president was injected with it, and everywhere the Chinese state company tries to sell its vaccine.

According to NPR, citing what it said were available data, prices of Sinopharm varied wildly from country to country. The Chinese state-produced vaccine ranged in prices from $18.50 per shot in impoverished Senegal, to $44 inside China to as much as $72.50 in other countries.

While NDAs, or non-disclosure agreements, between vaccine makers and governments muddy the price picture, there’s one thing that these contract conditions would not be able to hide—the huge profits that investors and companies are enjoying as the world falls on its knees for a cure to COVID-19.

“A number of pharmaceutical companies, including Pfizer, have seen a surge in their sales after winning approval from US and foreign governments for vaccines aimed at preventing the COVID-19 virus,” said a report last June 15 on the website Investopedia. 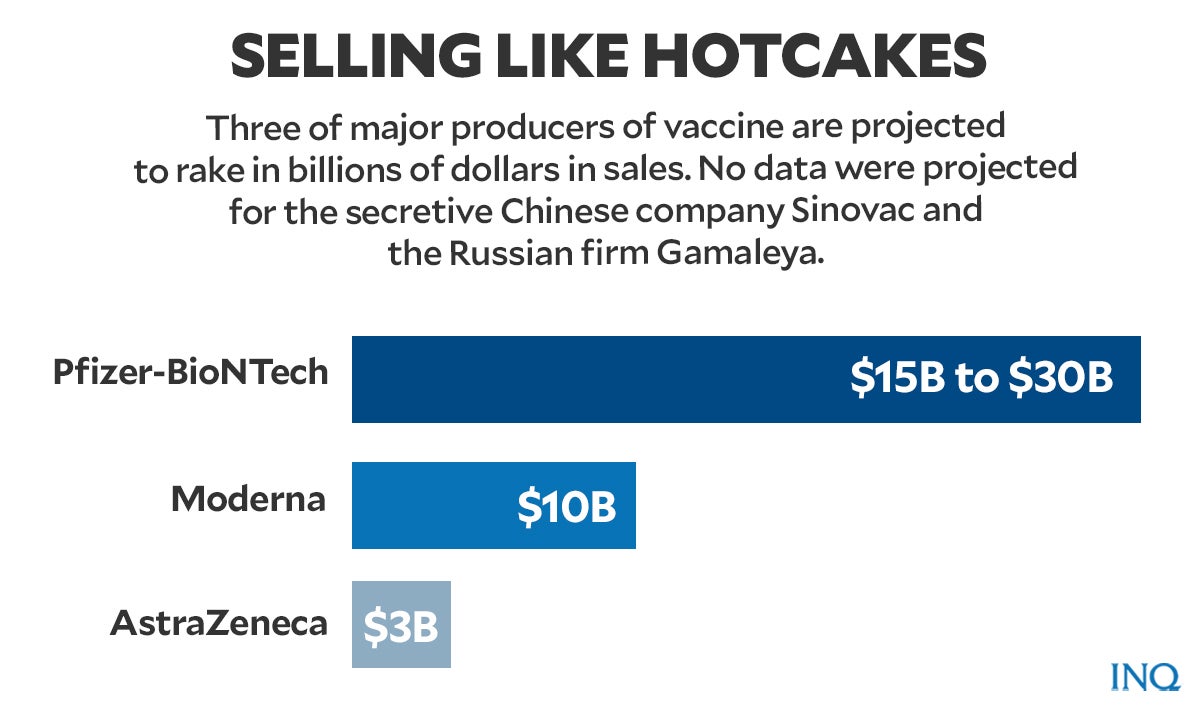 Billions in sales for one year

In a report last March, the UK paper The Guardian listed the sales projections for 2021 alone of biotech companies now making it big selling coronavirus vaccines:

Projected sales from vaccines are also pushing up share prices of manufacturers, according to the Guardian report.

Data are unavailable in the most secretive of the pharmaceutical firms—Sinovac, Sinopharm and Gamaleya.

Some websites said there was nothing wrong in profiting from the pandemic.

“What would have been wrong is if they had ignored the obvious and vast global social damage of COVID-19 and focused instead on the financial and potentially grave reputational risks of developing a vaccine for the world,” said a report last June 10 on the website The Conversation based in Australia.

“Instead, they acted in accordance with what corporate law requires—and what every corporation should be doing,” it said.

For many, however, profiting from the misery of hundreds of millions of people sick with COVID-19 or are threatened with infection smacked of a lack of conscience.

“The pandemic has come at a terrible human cost, so it is obscene that profits continue to come before saving lives,” said Winnie Byanyima, executive director of UNAIDS, a United Nations agency dealing with HIV and AIDS, in a report by NPR.

Worldwide, COVID-19 has already killed 3.85 million as of June and the counting hasn’t stopped. At least 178 million people had gotten sick globally.

There’s still so much vaccine to sell.