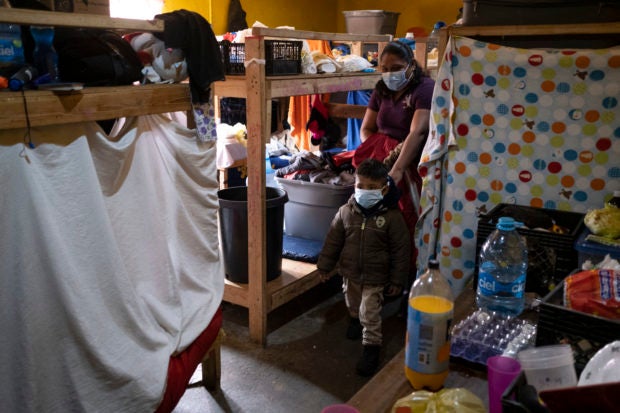 Brillite, a 34-year-old migrant from Mexico, walks with one of her children out of her dorm before heading to the border to start their asylum request process in the United States, at the Agape shelter in Tijuana, Baja California State, Mexico, on May 10, 2021. AFP FILE PHOTO

WASHINGTON — Migrant children sent to emergency shelters within the United States reported crowded living conditions, spoiled food, lack of clean clothes and struggles with depression, according to 17 testimonials filed in a court case on Monday.

The children, aged nine to 17 and largely from Guatemala, Honduras and El Salvador, in some cases spoke of waiting for months inside emergency shelters overseen by the U.S. government while struggling with the conditions, including trouble sleeping under bright lights and an inability to connect with family members.

The testimonials offer a detailed look into the conditions within a network of emergency shelters hastily erected by the administration of U.S. President Joe Biden to deal with a sharp rise in the number of unaccompanied migrant children arriving at the U.S.-Mexico border.

In recent months, the children have been moved more quickly out of crowded Border Patrol stations and into the emergency shelters as part of efforts to connect them with family members or other sponsors in the United States.

About 14,500 unaccompanied children are currently in the care of the U.S. Department of Health and Human Services, down from 22,000 in late April.

In one testimonial, a 13-year-old girl from Honduras said she had been placed on a suicide watch list while at an emergency shelter at Fort Bliss in El Paso, Texas.

The girl, who had spent nearly two months at the facility as on June 4, said she was separated from her father when crossing a river into the United States.

“The food here is horrible,” she wrote. “Yesterday we were given hamburgers but I couldn’t eat it because there was a foul odor coming from the bread … I really only eat popsicles and juice because that is the only food that I can trust.”

A 17-year-old girl from Guatemala also detained at Fort Bliss described sleeping in a large white tent with about three hundred girls, on cots stacked on top of each other.

She said it was hard to sleep due to the rattling noise the tent’s metal beams made at night, according to a declaration dated April 28. She said it was cold and that dirt came into the tent.

The girl said she had not been able to get information on her case and that she had struggled to get an appointment with a counselor to talk about her depression.

“A lot of the girls here cry a lot,” she said. “A lot of them end up having to talk to someone because they have thoughts of cutting themselves.”