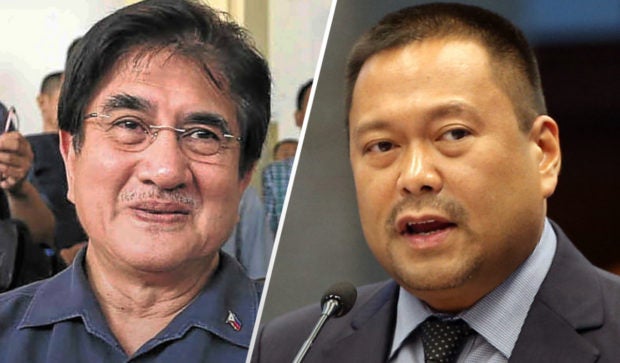 “I think so, as of now, that’s what I heard,” Sotto said in an online interview with reporters when asked if Honasan will run for the Senate in the coming elections.

Honasan is currently the secretary of the Department of Information and Communications Technology.

While Honasan is an independent candidate, Sotto said the Nationalist People’s Coalition (NPC) can adopt the former senator as one of its senatorial candidates. Sotto serves as the acting chairman of the NPC.

When asked if Ejercito, a member of NPC, will also seek a return to the upper chamber in the next elections, the Senate president answered in the affirmative.

Ejercito confirmed in a message to INQUIRER.net that he is considering running for the Senate again.

“Will run, because of my advocacy and unfinished business, if funds permitting. Because I am not prepared to run two consecutive national elections,” he said.

“(I) want to run. Again with funds permitting. So nothing is final on my part,” he added.

He added that he wants to continue the work he started in the upper chamber.

“(I) want to oversee that the implementation of the landmark laws which I have passed like the Universal Healthcare Law and creation of the Department of Human Settlements is given priority and implemented properly,” he said.

INQUIRER.net has contacted Honasan for confirmation on his possible Senate run, but he has yet to reply as of writing.

“I think Bam is running for re-election again,” Sotto also said, referring to former Senator Bam Aquino, who is under the Liberal Party. Aquino failed his re-election bid in 2019.

Earlier, Sotto also said that former senators Francis “Chiz” Escudero and Loren Legarda would also seek a comeback to the Senate in the upcoming polls.

Gatchalian is a member of the NPC, while Villanueva and Zubiri can be an adopted candidate of the party after consultations with its members, according to Sotto.

“All these will be relayed to my party mates, and I will make sure that I consult them or the others that we would like to support,” the Senate leader said.