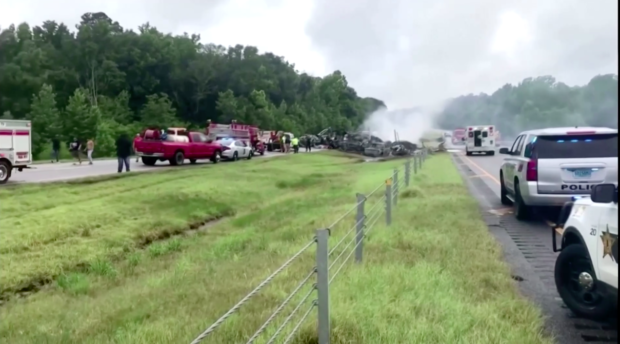 Nine children and a young father were killed when a van and other vehicles slammed together on a rain-drenched Alabama highway during Tropical Storm Claudette, authorities said on Sunday.

A nine-month-old girl and her 29-year-old father died in the Saturday afternoon pileup of about 18 vehicles, including an Alabama Sheriffs Youth Ranches vehicle carrying eight other children aged 4 to 17, who were killed, Butler County Sheriff Danny Bond said.

The ranch is home to “Alabama’s needy, neglected, or abused, school-aged children,” according to its website.

Disaster struck as the ranch’s 15-passenger van was returning from a beach vacation, driven by Tallapoosa Ranch director Candice Gulley, the only survivor aboard, who suffered serious injuries and was later hospitalized, said Michael Smith, chief executive of the nonprofit organization.

Killed were four girls who lived at the ranch, Gulley’s son and daughter and two boys who were their guests.

Smith, who spoke with Reuters on his way to a grief counseling session, declined to share their names or ages.

“It was horrendous. I’ve never seen anything like it in my whole life,” Smith said.

Earlier reports from officials had described the dead as nine girls and one man.

The cause of the crash on Interstate Highway 65 between Greenville and Fort Deposit, which was awash from the powerful storm, was under investigation. The accident occurred at about 2:45 p.m. local time on Saturday on a downhill stretch leading to a bridge over a creek, Bond said.

“This is the worst accident in our county history,” Bond told Reuters.

The father killed with his baby daughter was driving a car in which the mother and others did not suffer major injuries, Bond said.

About five other people were hurt in the crash, but none of the injuries were critical, Bond said.

Alabama Law Enforcement Agency officials are investigating whether the accident could have been caused by vehicles hydroplaning on a wet roadway, Bond said.

Efforts by Reuters to reach the Alabama Law Enforcement Agency were not immediately successful.

In the nonprofit Ranch program, founded in 1966, “children live in family situations with house parents on working ranches” designed to teach “Christian principles, hard work, responsibility, manners and loving kindness,” according to the website.

On the ranch, children help with livestock care, farm work, lawn care and “are taught responsibility by completing daily chores and participating in daily devotionals and pledging allegiance to the American flag.”

The weakening storm was classified on Sunday as Tropical Depression Claudette, according to the National Weather Service. It headed away from Alabama after shattering rainfall records in several cities and being blamed for an additional two deaths after a tree fell on a rain-drenched home outside Tuscaloosa on Saturday, local media reported.