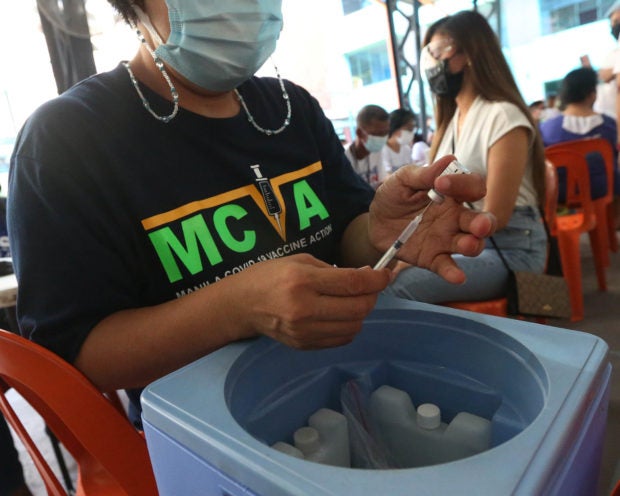 MANILA, Philippines — The government has sealed what is so far its biggest COVID-19 vaccine purchase deal, with the signing of an agreement for the delivery of 40 million doses of the vaccine developed by American multinational Pfizer Inc. and German biotechnology company BioNTech SE.

In a statement on Sunday, vaccine czar Carlito Galvez Jr. said he and Health Secretary Francisco Duque III signed a supply agreement with representatives of Pfizer on Saturday.

Galvez called this the “biggest and most decisive deal we ha[ve] for 2021.”

“The vaccines from Pfizer will significantly boost our national immunization program and will enable us to realize our goal of achieving herd immunity by year-end,” said the chief implementer of the National Task Force Against COVID-19.

To achieve herd immunity, the government aims to vaccinate up to 70 percent of the country’s estimated 110 million population.

Galvez said the delivery of the Pfizer doses will begin in October.

Officials of the task force did not disclose the purchase cost when asked, but said Pfizer would be paid directly by the Asian Development Bank (ADB), from which the Philippines borrowed $400 million for the purchase of vaccines.

The COVAX global vaccine pool has also committed to ship in 44 million doses, which brings the total number of expected doses to 157 million—past the number of doses needed to achieve herd immunity.

Furthermore, negotiations are ongoing for the supply of an estimated total of 16 million doses from US companies Novavax and Johnson & Johnson.

More than 8 million Filipinos have so far been inoculated, but only 2.1 million have received their second dose, according to the National Vaccination Operations Center.

Galvez said the target is to increase the daily vaccination rate from the current 322,929 to 500,000 in the next few months.

There were 7,652 more recoveries based on the DOH protocol that mild and asymptomatic cases are considered to have recovered after their two-week quarantine.

Total recoveries have reached 1,277,715. Meanwhile deaths rose by 84, including 59 people who were previously tagged as recoveries. This brings the death toll to 23,621.

There are 7,679 active cases, including 115 previously tagged as recoveries.

The DOH said 13.2 percent of 48,073 people who were tested on June 16 were confirmed infected with COVID-19. Two laboratories were not able to submit their data.

—WITH REPORTS FROM DONA Z. PAZZIBUGAN, REUTERS AND INQUIRER RESEARCH