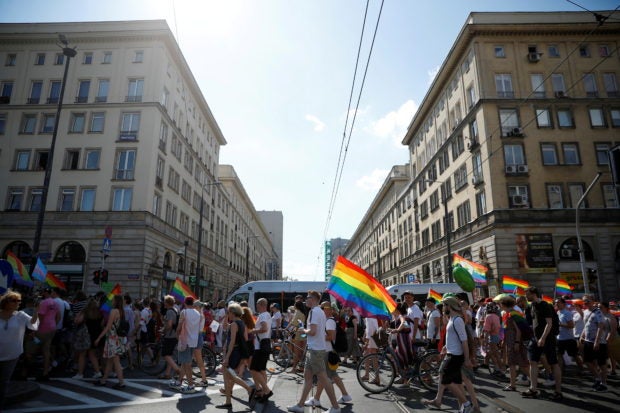 WARSAW — Thousands marched through central Warsaw on Saturday in an “Equality Parade” demanding an end to discrimination against the LGBT community, amid what campaigners say has been a rising tide of homophobia in Poland in recent years.

LGBT rights have become a central part of a wider struggle in the country between liberals, who stress the need for a more tolerant and inclusive society, and religious conservatives, who denounce what they say is an attempt to subvert traditional values in the predominantly Catholic nation.

In a sea of rainbow flags, the symbol of the LGBT community, marchers gathered outside the towering neo-Gothic Palace of Culture in central Warsaw, as a DJ played dance music from a stage before the start of the march.

“The Equality Parade is a celebration of LGBT people and all those who have to fight for their rights,” said 22-year-old restaurant worker Sylwester Cimochowski.

“Homophobia is a huge problem in Poland … there are lots of people who can’t cope with it, they kill themselves. The situation of LGBT people in Poland is tragic and that’s why I’m here – to support them.”

Both politicians and clergy have been accused of stoking homophobia in Poland.

Some conservatives say they have nothing against gay people; they only oppose what they call “LGBT ideology”.

Meanwhile, in Hungary Prime Minister Viktor Orban’s nationalist government, which is allied with Poland’s governing Law and Justice (PiS) party, has introduced a new law banning the “display and promotion of homosexuality” among under-18s.

“It’s getting more and more difficult … but at the same time there is more and more resistance,” said Marta Borkowska, a 37-year-old business consultant, referring to the situation of LGBT people in central and eastern Europe.

Asked what she would say to people who are opposed to the march, she replied, “I would say ‘don’t be afraid'”.