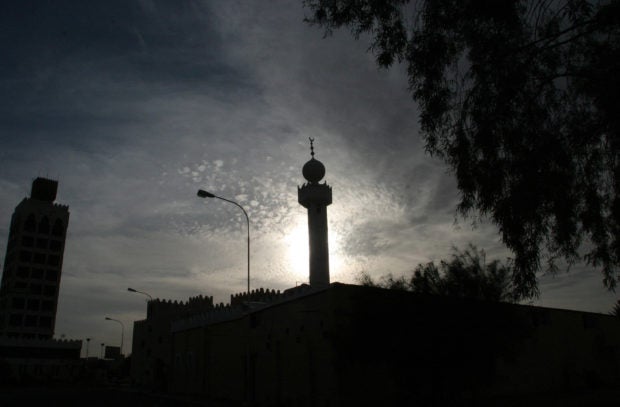 In this file photo taken on June 2, 2007, the sun sets behind a mosque in the Saudi city of Hael, around 700 kms north of the capital Riyadh. AFP FILE PHOTO

RIYADH — Muezzins issuing high-decibel calls to prayer have long been part of Saudi identity, but a crackdown on mosque loudspeakers is among contentious reforms seeking to shake off the Muslim kingdom’s austere image.

Saudi Arabia, home to the holiest Muslim sites, has long been associated with a rigid strain of Islam known as Wahhabism that inspired generations of global extremists and left the oil-rich kingdom steeped in conservatism.

But the role of religion faces the biggest reset in modern times as Crown Prince Mohammed bin Salman, spurred by the need to diversify the oil-reliant economy, pursues a liberalization drive in parallel with a vigorous crackdown on dissent.

Chipping away at a key pillar of its Islamic identity, the government last month ordered that mosque loudspeakers limit their volume to one-third of their maximum capacity and not broadcast full sermons, citing concerns over noise pollution.

In a country home to tens of thousands of mosques, the move triggered an online backlash with the hashtag “We demand the return of mosque speakers” gaining traction.

It also sparked calls to ban loud music in restaurants, once taboo in the kingdom but now common amid liberalization efforts, and to fill mosques in such large numbers that authorities are forced to permit loudspeakers for those gathering outside.

But authorities are unlikely to budge, as economic reforms for a post-oil era take precedence over religion, observers say.

“The country is re-establishing its foundations,” Aziz Alghashian, a politics lecturer at the University of Essex, told AFP.

“It’s becoming an economically driven country that is investing substantial effort in trying to appear more appealing — or less intimidating — to investors and tourists.”

In the most significant change that began even before the rise of Prince Mohammed, Saudi Arabia neutered its once-feared religious police, who once chased people out of malls to go and pray and berated anyone seen mingling with the opposite sex.

In what was once unthinkable, some shops and restaurants now remain open during the five daily Muslim prayers.

As clerical power wanes, preachers are endorsing government decisions they once vehemently opposed — including allowing women to drive, the reopening of cinemas and an outreach to Jews.

The practice of non-Muslim religions remains banned in the kingdom, but government advisor Ali Shihabi recently told US media outlet Insider that allowing a church was on “the to-do list of the leadership”.

Authorities have publicly ruled out lifting an absolute ban on alcohol, forbidden in Islam. But multiple sources including a Gulf-based diplomat quoted Saudi officials as saying in closed-door meetings that “it will gradually happen”.

“It’s not an exaggeration to say that Saudi Arabia has entered a post-Wahhabi era, though the exact religious contours of the state are still in flux,” Kristin Diwan, of the Arab Gulf States Institute in Washington, told AFP.

“Religion no longer has veto power over the economy, social life and foreign policy.”

In another shift, observers say Saudi Arabia appears to be turning its back on global issues affecting fellow Muslims, in what could weaken its image as the leader of the Islamic world.

“In the past its foreign policy was driven by the Islamic doctrine that Muslims are like one body — when one limb suffers the whole body responds to it,” another Gulf-based diplomat told AFP.

Prince Mohammed, popularly known as MBS, has sought to position himself as a champion of “moderate” Islam, even as his international reputation took a hit from the 2018 murder of Saudi journalist Jamal Khashoggi in Istanbul.

He has vowed to crack down on radical clerics, but observers say many of the victims have been advocates for moderate Islam, critics and supporters of his rivals.

Dweish has not been seen since his detention in the holy city of Mecca in 2016 after he tweeted a parable about a child spoiled by his father, according to London-based rights groups ALQST and a source close to his family.

It was seen as a veiled insult to MBS and his father King Salman.

Another is Salman al-Awdah, a moderate cleric detained in 2017 after he urged reconciliation with rival Qatar in a tweet. He remains in detention even after Saudi Arabia ended its rift with Qatar earlier this year.

“Politically, MBS has eliminated all his rivals, including those who shared many of the same goals of religious reform,” said Diwan.