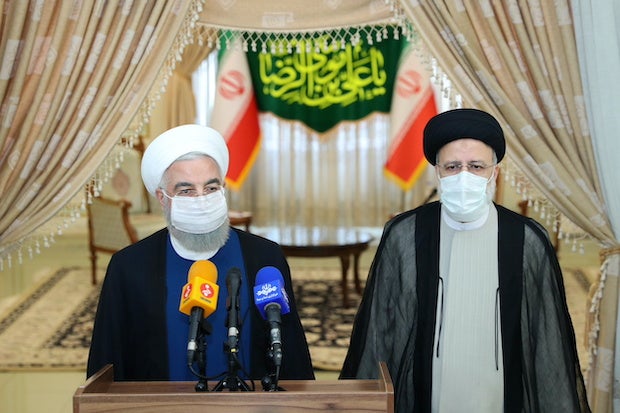 DUBAI — Ebrahim Raisi, a hardline judge who is under U.S. sanctions for human rights abuses, secured victory as expected on Saturday in Iran’s presidential election after a contest marked by voter apathy over economic hardships and political restrictions.

With all 28.9 million ballots counted, Raisi was elected with a tally of 17.9 million, Interior Minister Abdolreza Rahmani Fazli said on state TV.

Turnout in Friday’s four-man race was a record low of around 48.8% and there were 3.7 million invalid ballots thought to be mostly blank or protest votes.

Appointed by Supreme Leader Ayatollah Ali Khamenei to the high-profile job of judiciary chief in 2019, Raisi was placed under U.S. sanctions a few months later over human rights violations.

Those included the role that human rights group say Raisi played in the executions of thousands of political prisoners in the 1988 and in the violent suppression of unrest in 2009.

Iran has never acknowledged the mass executions, and Raisi himself has never publicly addressed allegations about his role.

Seen by analysts and insiders as representing the security establishment at its most fearsome, Raisi, 60, had been widely tipped to win the contest, thanks to Khamenei’s endorsement.

“We continue to call for Ebrahim Raisi to be investigated for his involvement in past and ongoing crimes under international law, including by states that exercise universal jurisdiction,” she said in a statement.

Outgoing pragmatist President Hassan Rouhani, barred by the constitution from seeking a third term, visited Raisi at his office to congratulate him, and Foreign Minister Mohammad Javad Zarif said he would lead Iran well.

“We will stand by and cooperate fully with the president-elect for the next 45 days, when the new government takes charge (in early August),” state media quoted Rouhani as saying.

Iran and six major powers are in talks to revive their 2015 nuclear deal. Donald Trump, U.S. president at the time, abandoned the deal in 2018 and reimposed crippling sanctions that have squeezed Iran’s oil income.

However, with Iran’s ruling clerics aware their political fortunes rely on tackling worsening economic hardships, Raisi’s win will not disrupt Iran’s effort to revive the pact and break free of tough U.S. oil and financial sanctions.

“Raisi’s hardline political and economic beliefs will limit the scope for significant foreign investment if a deal is reached and further isolate Tehran from the West,” said senior analyst Henry Rome at Eurasia Group.

Khamenei, not the president, has the last say on all issue of state such as Iran’s foreign and nuclear policies.

“We will make every effort in the new government to solve the problem of people’s livelihoods,” state media quoted Raisi as saying.

Seeking to win over voters preoccupied by bread-and-butter issues, Raisi has promised to create millions of jobs and tackle inflation, without offering a detailed political or economic programme.

Hoping to boost their legitimacy, the country’s clerical rulers had urged people to turn out and vote on Friday, but simmering anger over economic hardships and curbs on freedoms kept many Iranians at home.

Khamenei said the turnout displayed the clerical establishment’s popularity. But more than half of eligible voters were too dissatisfied to vote or appeared to have heeded calls by hundreds of dissidents, at home and abroad, to boycott the vote.

Another deterrent for many pro-reform voters was a lack of choice, after a hardline election body barred heavyweight moderates and conservatives from standing.

A U.S. State Department spokesperson said on Friday: “Iranians were denied their right to choose their own leaders in a free and fair electoral process” – a likely reference to the disqualification of candidates.

“I am scared. I don’t want to go back to jail again. I am certain that any kind of dissent will not be tolerated,” said Hamidreza, 31, who declined to give his full name. He was jailed for participating in unrest in 2019 that broke out over fuel price hikes and quickly turned political.

Analysts say the election win could increase Raisi’s chances of succeeding Khamenei, who himself served two terms as president before becoming supreme leader in 1989.

Fabian nearly out of PAR, but still intensifies habagat — Pagasa