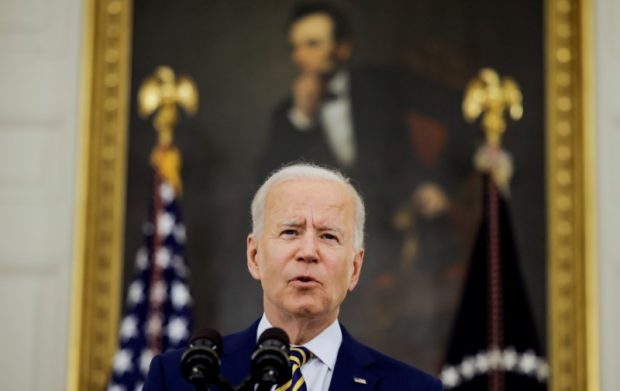 WASHINGTON — President Joe Biden and Vice President Kamala Harris on Friday urged Americans to get COVID-19 shots, as the country looks likely to miss the White House’s goals for vaccination next month as a new coronavirus variant triggered serious concerns.

“Act now, act now,” Biden said in remarks at the White House, urging the unvaccinated to talk to their family and friends who have had shots and to their doctors.

Deaths and hospitalizations are going “drastically down in places where people are getting vaccinated,” but not other areas, Biden said. “They’re actually going up in some places.”

At the current pace, the United States seems unlikely to hit Biden’s goal of having 70% of adults receive at least one dose of a COVID-19 vaccine by July 4, the Independence Day holiday.

As of Friday, around 65.1% of people in the United States had gotten at least one shot, and that mark has increased by less than one percentage point over the past two weeks.

That pace would have to more than double over the next two weeks for the United States to hit the target.

The White House had no immediate comment on the possibility of missing the July 4, 70% goal. Currently, only 15 states and Washington, D.C. have achieved that level.

U.S. government data show a political divide as well, with states won by former President Donald Trump lagging well behind in vaccination rates than those won by Biden.

“When you get the vaccine for yourself, that means that you will not possibly pass it on to somebody else in general because you’re unlikely to get COVID,” Harris said during a vaccination drive at Atlanta’s famed Ebenezer Baptist Church. “Isn’t that an extension of love thy neighbor?” she said, to which several in the audience responded, “Amen!”

The United States has administered 300 million COVID-19 vaccinations in 150 days, a White House official said on Friday ahead of Biden’s speech.

Officials said Biden’s push to accelerate vaccinations since taking office in January was paying off, with COVID-19 cases, hospitalizations and deaths down to their lowest levels since the start of the pandemic in early 2020.

The U.S. death toll remains the highest in the world, although other countries, including Brazil, Britain and Russia, have higher death rates as a measure of their populations.

A White House fact sheet said the number of COVID-19 deaths has decreased by 90% since Biden took office in January, when more than 3,300 Americans were dying each day, and highlighted big gains in the economy as people return to work.

It said more than 175 million Americans had received at least one shot, and 55% of adults were fully vaccinated.

Addressing racial imbalances in vaccination rates remained a continuing concern, the White House said, but pointed to gains there as well. In the past month, it said, people of color made up 54% of nationwide vaccinations although they comprise 40% of the U.S. population.

“It’s a variant that is more easily transmissible, potentially deadlier and particularly dangerous for young people,” he said. “But the good news is we have a solution. The science and the data are clear. The best way to protect yourself against these variants is to get fully vaccinated.”

The Biden administration is counting on faith leaders and community groups to help increase vaccination rates and overcome lingering vaccine hesitancy, especially among people of color.

“Church is always a healing place. It’s so appropriate that we’re doing this here,” Harris said in remarks at Ebenezer Baptist, where civil rights leader the Reverend Martin Luther King Jr. and his father once preached.