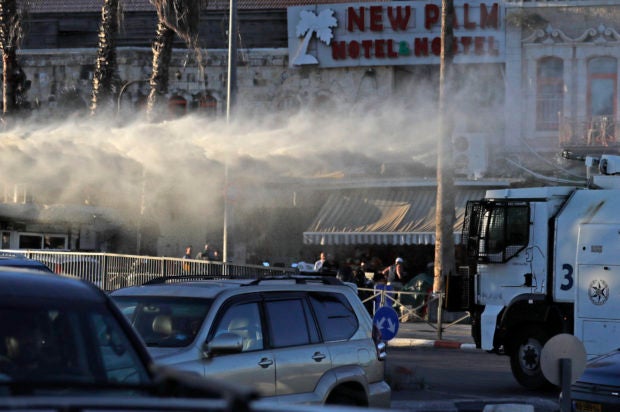 Israeli security forces spray Palestinian protesters with skunk water outside Damascus Gate in Jerusalem’s Old City on June 17, 2021 during a protest in response to chants by Israeli ultranationalists targeting Islam’s Prophet Mohammed in the March of Flags earlier this week. (AFP)

The fire balloons and air strikes are the latest violence heaping pressure on a fragile ceasefire between Israel and Gaza’s Hamas rulers that came into place on May 21, ending 11 days of heavy fighting.

“Over the past day, arson balloons were launched from the Gaza Strip into Israeli territory,” Israel’s military said in a statement.

AFP journalists in the Palestinian enclave also reported hearing explosions, which the army said hit sites in both Gaza City and in Khan Yunis, in the south of Gaza, home to some two million people.

Palestinian militants in Gaza launched balloons for a third day running on Thursday, according to Israeli firefighters battling the blazes sparked by the devices.

The balloons are basic devices intended to set fire to farmland and bush surrounding Gaza.

Then, as the balloons continued, the air force launched a second round of strikes overnight Thursday to Friday.

Israel army chief Aviv Kohavi late Thursday issued orders to “increase the IDF’s (Israeli Defense Forces’) readiness and preparedness for a variety of scenarios including a resumption of hostilities,” the army statement read.

“The IDF will continue to strike military capabilities and infrastructure belonging to the terror organisation, and holds the Hamas as responsible for all events transpiring in the Gaza Strip,” the statement added.

The new exchanges of fire come as Egypt tries to consolidate the ceasefire it helped broker.

The conflict killed 260 Palestinians including some fighters, according to Gaza authorities.

In Israel, 13 people were killed, including a soldier, by rockets fired from Gaza, the police and army said.

Cairo, along with the United Nations, are hoping to support the reconstruction of Gaza following a war that saw whole tower blocks reduced to smoking rubble and key infrastructure smashed.

The densely crowded Mediterranean enclave has been under an Israeli blockade since 2007.

Israeli army chief Kohavi is due to leave Tel Aviv on Saturday for a six-day visit to the United States for talks.

He is the first top Israeli official to do so since the new coalition government headed by Bennett took over on Sunday.

Kohavi will visit the US military’s Central Command (Centcom) in Florida, with items on the agenda to include Gaza’s Islamist rulers Hamas and Israel’s arch-foe Iran, as well as Hezbollah, the Tehran-backed Lebanese Shiite Muslim group.