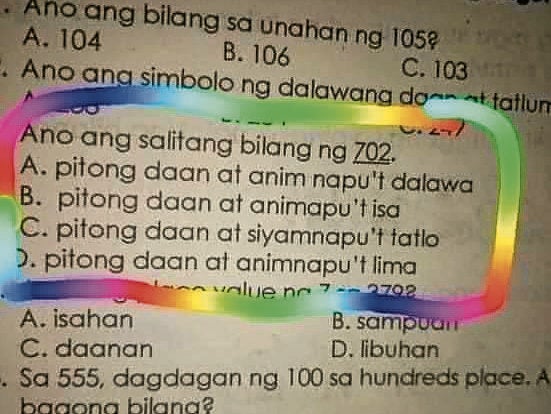 A screenshot of error laden learning materials circulating online. (Photo was published on Oct. 17, 2020, in the Lifestyle section of the Philippine Daily Inquirer)

MANILA, Philippines — The House Committee on Public Accounts is mulling the imposition of penalties against persons behind the publication and distribution of school books and other learning materials containing errors or misleading information.

Talks on the imposition of sanctions started as errors were discovered in learning materials and modules that the Department of Education (DepEd) approved, published, or distributed to basic and secondary education students.

Probinsyano Ako Partylist Rep. Jose “Bonito” C. Singson Jr., who chairs the committee, specifically pointed out the use of a vulgar Filipino word for sexual intercourse that was found in a self-learning module (SLM) distributed to students by the DepEd division in Mabalacat, Pampanga.

“The Mabalacat learning module that contained vulgarity is very alarming. While DepEd officials boasted that they corrected the error, it pains us to learn that the culprit has not been punished,” Singson said in a statement.

The use of the vulgar word was discovered following the presentation of educator Antonio Calipjo-Go during the committee’s hearing on Monday this week.

During the hearing, DepEd Undersecretary Tonisito Umali admitted that while they have acted on the issue as early as February 2021, the person who purposely put the vulgar word in the SLM had not been identified and punished.

“What he or she did was intentional, glaringly malicious, and utterly despicable.  Like the numerous errors found by COA [Commission on Audit] in DepEd learning materials, it will be difficult for our students to unlearn what their teachers asked them to digest,” Singson said.

To address the issue, Singson said the public accounts panel would determine whether or not there would be a need to impose penalties on persons involved in the publication and distribution of books and learning materials for students in basic and secondary education.

Singson said not only authors but also government officials, and personnel tasked to edit, proofread, examine, and approve errant books for publication and distribution should be penalized.

“Unlike our students who are minors and are gullible to assimilate what is taught them in school, I believe it is now time to teach those who committed mistakes, whether intentional or not, a lesson,” Singson said.