NHA warns gov’t housing beneficiaries against renting out their units 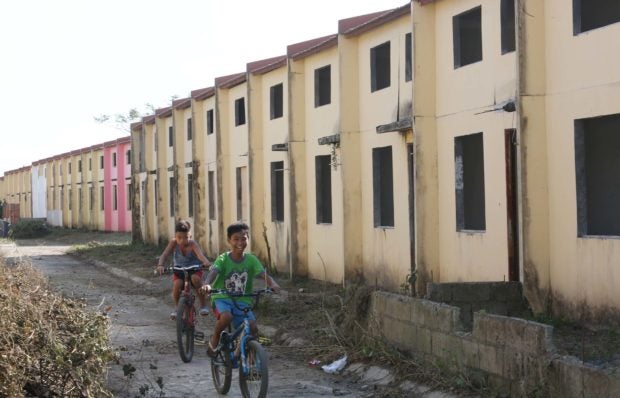 NEW COMMUNITY A government housing project in Ibaan town, Batangas province, will become the temporary home of thousands of families who used to live on Taal Volcano Island. The National Housing Authority built these houses between 2016 and 2017 for policemen and soldiers. —MARIANNE BERMUDEZ

MANILA, Philippines — The National Housing Authority (NHA) on Wednesday warned housing beneficiaries against renting out units awarded to them, as doing so could lead to the cancellation of their awards.

In a Senate hearing, NHA general manager Marcelino Escalada Jr. said that in the agency’s proposed charter for 2025, they are “very aggressive to observe the non-payment even as well as the non-occupancy” of units that may be transferred to other citizens in need.

“My instruction was to cancel the award because kumikita pa si original awardee. Our housing project is only P250, P300, P500 per month and they are renting it out at P3,000, P4,000 by other persons interested in occupying,” he added.

(My instruction was to cancel the award because the original awardee is still earning. Our housing project is only P250, P300, P500 per month and they are renting it out at P3,000, P4,000 by other persons who are interested in occupying it.)

Escallada said that if inhabitants of the units admit that they are renters, NHA will cancel the original award because the need for housing is no longer with the original beneficiary.

In 2018, the Senate adopted a joint resolution authorizing NHA to re-award uninhabited and unawarded units to other qualified beneficiaries such as information settlement families (ISFs), natural disaster victims and low-salaried laborers.

NHA explained that since the joint resolution, 55,000 non-occupancy units nationwide were already awarded to eligible citizens currently living in the units and only 3,800 remain unoccupied.

Senate committee on urban planning, housing, and resettlement chairman Francis Tolentino, however, questioned the agency as to why many awarded NHA housing units have still no occupancy given that the beneficiaries were supposed to be in need of homes.

Escalada explained that the current charter prohibits the agency from evicting beneficiaries as it goes against their philosophy and adds to the number of homeless citizens.

“The very reason why NHA cannot evict is because in our own original charter, there is no power to evict, even with the non-payment because according to the philosophy, the moment NHA evicts it adds on to the other homelessness in the other side of the gap,” Escalada said.

(The available housing units of NHA that are unoccupied, can these be rented so that it could be used temporarily and at the same time, those who want to relocate and leave their current homes may have somewhere to go to.)

Escalada said that renting the units may be “impossible” as their current beneficiaries have already given their initial payment, amortization of P200.

“The only setback is that they haven’t physically occupied yet, so it may appear non-occupied but in documents they are already fully awarded,” the manager said.

Tolentino then asked if NHA could procure a policy that payment for housing projects constructed and financed by the government that remain unoccupied be returned to the original awardees in order to be able to re-award the units.

“If you have yet occupied (the unit) for 3-years, for instance, can NHA just return a reasonable amount of the payment made? And thereafter, re-award that to another more needing beneficiary, a housing structure from NHA. We consider this as a public good, and as a public good it has to benefit the general public and if it is not occupied, even though you consider this a public property, it deviates from the original purpose of benefitting the homeless,” Tolentino said.