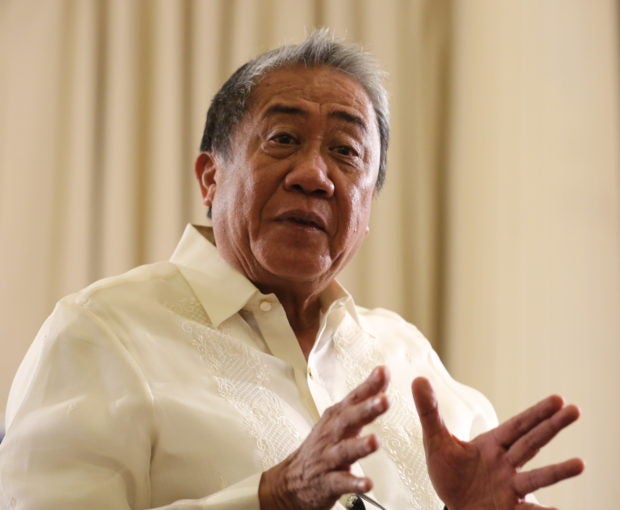 MANILA, Philippines — Transportation Secretary Arthur Tugade may consider running for public office in the 2022 elections should President Rodrigo Duterte ask him to do so.

“I am a good soldier. The President is a very good commander-in-chief,” he added. “What the President says so it will go in so far as I am concerned.”

Tugade was the former classmate of Duterte at the San Beda University’s College of Law.

He was a successful businessman and former head of the Clark Development Corp. under the Aquino administration before he quit to help with Duterte’s presidential campaign.

Tugade has been Secretary of the Department of Transportation since the current administration came to power in 2016.

He was also among the Cabinet secretaries favored by Duterte to run for senator in 2022, news website Politiko reported earlier this year.

Tugade sidestepped further questions on his potential political ambitions, including what post he might pursue, saying his priority was completing projects promised within the term of Duterte.

“The name of the game at this time is to finish the projects. For the people, for the country,” he also said on Wednesday.

The briefing was called to provide updates on the DOTr’s road, railway, air, and maritime infrastructure projects.
Tugade said they accomplished “low-hanging fruits” such as putting an end to the bullet planting scam at Manila’s Ninoy Aquino International Airport and constant breakdowns at the Metro Rail Transit Line 3—problems inherited from previous administrations.

Long-term projects were also implemented and remain a work in progress.

The DOTr invested in new airport and seaport projects by itself or with the help of the private sector.

A new passenger terminal at Clark International Airport, another PPP project, will be inaugurated next month while airport projects in Cotabato City, General Santos,  Zamboanga, and Busuanga will be completed between August and October this year, he said.

Under the Build Build Build infrastructure program, the DOTr wants to make its biggest mark through new railway lines even if most of the flagship projects will be fully completed years after the administration ends. The DOTr is targeting to increase the country’s railway footprint to over 1,200 kilometers by next year from 77 km in 2016.

The DOTr’s largest railway projects are the Japan-funded Metro Manila Subway and the North-South Commuter Railway in Luzon, financed by the Japanese government and Asian Development Bank.

Meanwhile, congestion on the busy EDSA road in Metro Manila remains a problem even with the opening of San Miguel Corp.’s Skyway 3 elevated expressway and reduced private and public transportation activities during the COVID-19 pandemic.

This comes as Duterte claimed last week that traffic woes at EDSA had been solved—a view critics derided as being out of touch.

Tugade explained that specific events—such as the long queues at the DOTr’s EDSA bus carousel last Friday—were caused by factors such as sudden strong rains during rush hour and the lack of buses.

He added that they were preparing to ask the Inter-Agency Task Force handling the COVID-19 pandemic to gradually increase public transport capacity, now capped at 50 percent, by another 5 to 10 percent.

“We ask for understanding from riders and communities for the congestion that is occurring,” Tugade said. “Rest assured we are on our toes in order to address those causes of inconvenience.”