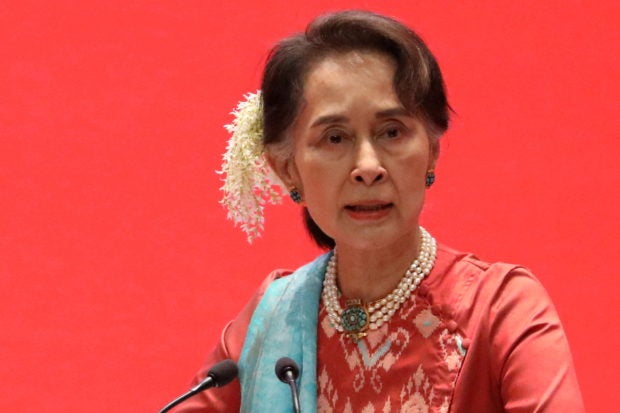 Naypyidaw, Myanmar — Deposed Myanmar leader Aung San Suu Kyi went on trial for sedition in a junta court Tuesday, more than four months after her government was ousted in a coup that has thrown her country into turmoil.

Huge pro-democracy protests against the generals’ February putsch have been met with a brutal crackdown that a monitoring group says has killed more than 850 people.

Suu Kyi “appeared in good health” at the hearing in the capital Naypyidaw as a witness produced by the junta testified against her on colonial-era sedition charges, her lawyer Min Min Soe told AFP.

“She has good resistance… She listens normally… At some points (during the testimony against her), she smiled.”

The court also heard testimony on a separate charge Suu Kyi broke coronavirus restrictions during last year’s elections that her National League for Democracy party won in a landslide.

If convicted on all counts, the Nobel laureate and democracy icon, 75, could be jailed for more than a decade.

Journalists were barred from proceedings in the sparse courtroom in the capital built by the previous junta, with only one judge, two clerks present along with a witness and defense and prosecution lawyers.

There was a heavy police presence around the compound, an AFP reporter said.

Under house arrest and invisible bar a handful of court appearances, Suu Kyi has been hit with an eclectic raft of charges, including accepting illegal payments of gold and violating a colonial-era secrecy law.

“Whenever we see her, Amay is always strong with her confidence,” Min Min Soe said, using an honorific. “She’s always smart.”

Former president Win Myint and Dr. Myo Aung, a senior NLD leader are also on trial for sedition and appeared beside Suu Kyi on Tuesday.

Suu Kyi also faces a separate charge of violating a colonial-era secrecy law — a case that is pending in a court in the commercial hub Yangon.

Her long-delayed trial comes as fighting flares in several communities across Myanmar and diplomatic efforts to resolve the crisis flounder.

Myanmar’s ambassador to the United Nations, who has refused to leave his post despite being fired after the coup has called for the international community to take “effective collective measures” against the junta.

“The lack of such actions… will further encourage the military to continue committing inhumane and brutal acts against civilians,” he wrote in comments published Monday ahead of expected UN Security Council talks on the Myanmar crisis.

Kyaw Moe Tun has passionately rejected the coup and brushed aside the junta’s claims that he no longer represents Myanmar.

The United Nations still considers him as the rightful envoy.

Junta leader Min Aung Hlaing has justified his power grab by citing alleged electoral fraud in the November poll won by the NLD.

The junta has previously said it would hold fresh elections within two years but has also threatened to dissolve the NLD.

Read Next
French Muslims pay heavy price in COVID pandemic
EDITORS' PICK
House energy committee chair Arroyo bats for cheap electricity
Why Tagle is a leading papal contender
A laptop that maximizes your WiFi so you can maximize your productivity
PH resumes talks with China on Chinese-funded transport projects
Powered by style, innovation and passion
In Borongan, nuns play hoops (not mahjong)
MOST READ
Why Tagle is a leading papal contender
Iza Calzado asked self upon learning she’s pregnant at 40: ‘Is this what I want?’
Zubiri on SRA mess: Shameful, disgusting
Arjo Atayde reveals proposal to Maine Mendoza was ‘more than a year’ in the making
Don't miss out on the latest news and information.

newsinfo
House energy committee chair Arroyo bats for cheap electricity
newsinfo
Why Tagle is a leading papal contender
technology
A laptop that maximizes your WiFi so you can maximize your productivity
newsinfo
PH resumes talks with China on Chinese-funded transport projects
technology
Powered by style, innovation and passion
newsinfo
In Borongan, nuns play hoops (not mahjong)
newsinfo
Why Tagle is a leading papal contender
August 14, 2022
entertainment
Iza Calzado asked self upon learning she’s pregnant at 40: ‘Is this what I want?’
August 14, 2022
newsinfo
Zubiri on SRA mess: Shameful, disgusting
August 14, 2022
entertainment
Arjo Atayde reveals proposal to Maine Mendoza was ‘more than a year’ in the making
August 13, 2022
newsinfo
My neighbor FVR: From soldier to president
August 14, 2022
sports
Gilas gets solid core with Clarkson, Sotto planing in
August 14, 2022