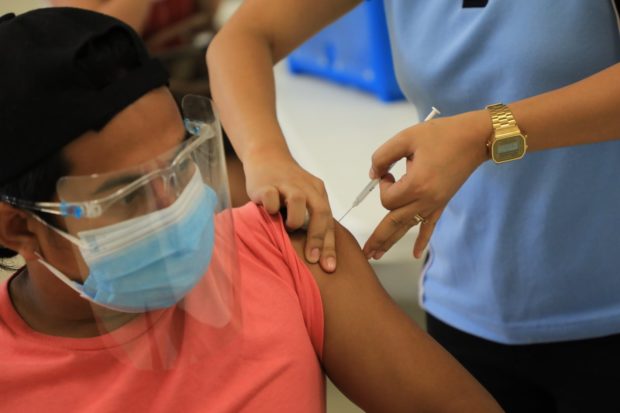 A frontliner belonging to the A1 priority group receives a COVID-19 vaccine. (File photo from the City of San Fernando Information Office)

MANILA, Philippines—First, the bad news: Vaccine hesitancy among Filipinos is leaving scores of doses unused. The good news? It’s freeing up doses and funds for those willing to get the injections.

This was what emerged during the Senate committee of the whole hearing on COVID-19 response on Tuesday (June 15).

Excess funds because many adult Filipinos refuse to be vaccinated against SARS Cov2, the virus that causes COVID-19, can be used for another stage in the vaccination program—the one for children, Finance Secretary Carlos Dominguez III said.

During the Senate inquiry, Dominguez that the government might need an estimated P25 billion for the vaccination of children.

“There is a second horizon we might need to look at, however,” said Dominguez.

“We might need an allocation of about P25 billion to cover the inoculation of children aged 12 years old and above,” he said.

This is on top of the total P88.5 billion that is already allocated for the government’s vaccination program. 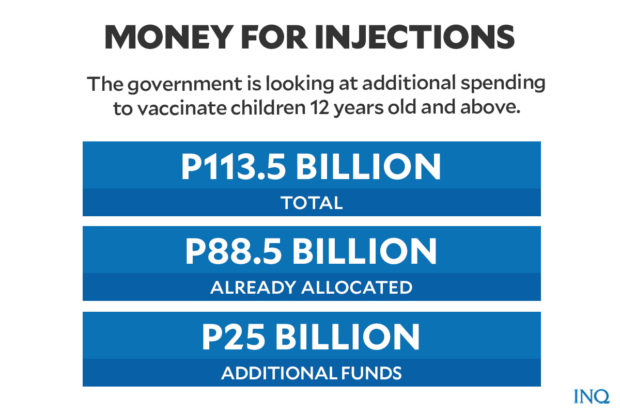 Part of the funding for the additional vaccine doses for the youth, according to Dominguez, will come from the excess as a result of those who refused to get injections.

“Not everybody is going to accept the vaccination,” Dominguez said.

“We know from surveys that there are probably 25 to 30 percent of the adult population who don’t want to be vaccinated,” he said.

“That will be able to cover for the children who want to be vaccinated at the moment,” the finance secretary explained as a response to Sen. Panfilo Lacson’s questions.

“If they wish to change their minds later on, like next year, as I said, we will have to add it to the NEP (National Expenditure Program) or the GAA (General Appropriations Act) request,” he added.

During a taped weekly briefing with President Rodrigo Duterte aired Monday (June 14) night, Dominguez assured that the government has enough funds to supply vaccines for children.

READ: Gov’t has enough funds for COVID-19 vaccination of even teenagers – Dominguez

Data from the most recent survey conducted by Pulse Asia were double of what the secretary mentioned.

Based on results released last March 26, six in ten Filipinos said they will not get vaccinated against SARS Cov2, mostly because of concerns related to the safety of the vaccines.

According to the pollster, 61 percent of Filipinos refuse to get coronavirus jabs while 23 percent are still undecided. 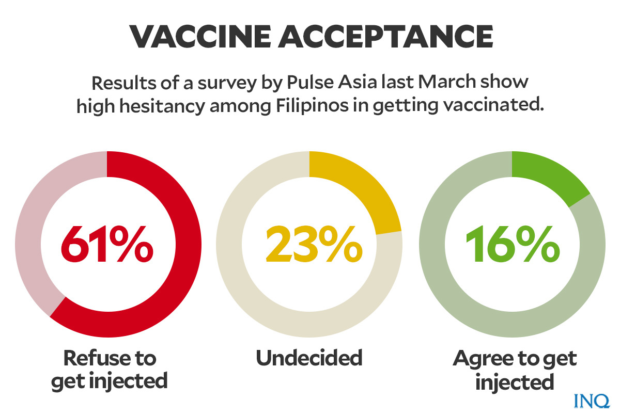 Pulse Asia said most who said they were not getting injections, or 84 percent, and those still undecided, or 74 percent, “point to uncertainty about COVID-19 vaccines as the primary reason” for hesitancy.

The results showed a higher number compared to the survey released last January which revealed that almost half, or 47 percent, of Filipinos said they will not get vaccinated.

The survey noted that the main reason for the hesitancy is safety concerns. 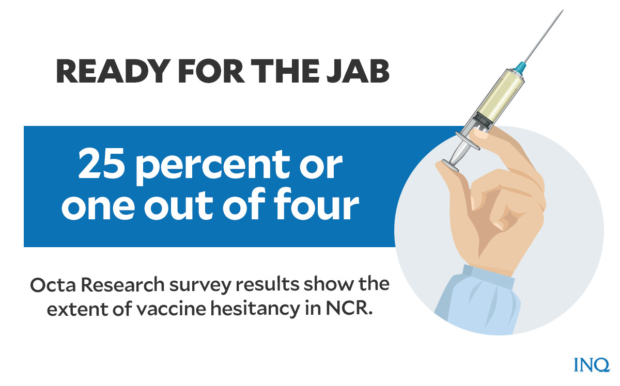 Data from results of a survey by OCTA Research released in the same month showed that one out of four, or 25 percent, of respondents in the National Capital Region (NCR) are willing to get inoculated.

Lacson, however, said while
“ reality on the ground” showed that there are still people who don’t want vaccines, the government must assume that all procured vaccines were enough for the target population.

“We cannot also assume that the mindset of the Filipinos will remain constant that there will be a certain percentage of the population that are not willing to be vaccinated,” Lacson said. “That could change,” the senator added.

Dominguez said the funding for vaccine doses for children was part of a “moving plan.”

He said the P25 billion additional funds should be on standby “because children can now be vaccinated.” “That is not in our original plan,” said Dominguez. He said the original plan was to vaccinate 70 million Filipino adults. At least 15 million who could be vaccinated, too, are teenagers, he added.

“If we are going to do that, we will have to fund around P25 billion.”

The amount, however, was just an estimate and could change if other vaccine brands are allowed for children, Dominguez said.

“It is just an estimate at this point in time because the health authorities might have another vaccine,” he said.

The Food and Drug Administration (FDA) has approved the use of US-made Pfizer COVID-19 vaccines on children aged 12 to 15.

Government medical experts will also review the clinical trial data of Sinovac Biotech after China approved the emergency use of the vaccine on younger children and adolescents.

READ: Experts to review Sinovac use in kids

How many doses do we have?

According to Galvez, the total deliveries of vaccines to the Philippines so far has reached over P12.7 million doses.

The available vaccines in the country were produced by the following manufacturers:
• Sinovac: 7,500,000 doses, a million of which were donated by China
• AstraZeneca: 2,556,000 doses from COVAX Facility
• Pfizer-BioNTech: 2,472,210 doses through COVAX Facility
• Gamaleya Research Institute: 180,000 doses purchased by the government
A total of 6,948,549 doses have already been administered as of June 13.

At least 5,068,855 Filipinos have already received their first dose of the vaccines. These are those who are in the four priority groups—A1 (health care workers), A2 (seniors), A3 (those with comorbidity) and A4 (economic frontline workers).

At least 1,879,694 had been fully vaccinated or have received the required two doses. This is 3.24 percent of the targeted 58 million Filipinos to achieve herd immunity.

The “brand agnostic” policy of the government on vaccine brands would make it hard to say how many doses of excess Pfizer vaccines are available, though.

The policy required the brand to be kept secret until it was time to inject it.

There are also no available data yet on the amount of doses per vaccine already administered.